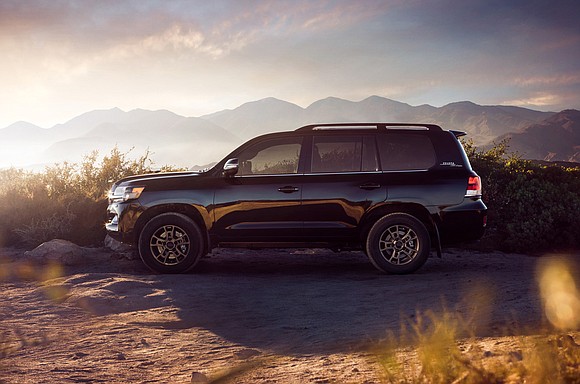 Unless you are a sport utility aficionado, you may have never heard of the Toyota Land Cruiser Heritage Edition. But it has been in the automaker’s lineup since 1958.

Our test vehicle was powered by a 5.7-liter V8 that made 381 horsepower and 401 pound-feet of torque. It had an eight-speed automatic transmission.

This vehicle was not for those-light in the wallet. It got 13 mpg in the city, 17 mpg on the highway and 14 mpg combined.

It was a brute and meant to be. Our test vehicle had a basket on the roof for carrying stuff. It looked like it belonged in the badlands or somewhere just as rugged.

The vehicle on had two rows of seats so it could have more storage area behind the second row.

To be blunt, this is an older platform that Toyota has managed to leverage with all sorts of accessories. It had USB and auxiliary plugs, heated and cooled front seats, as well as heated second row seats. There was also a grounded 120V plug in the rear cargo area. An optional third row is coming.

Of course, it could go sloshing through the woods. It had four-wheel high and low gears. You could put it in two-wheel-drive as well. Our Heritage package included 18-inch forged alloy wheels with Toyota center caps that were bronze. Oh, and it was black on black in black.

The running and chrome lower body side moldings of the standard Land Cruiser were deleted. We had to climb up into and climb down out of this full-size SUV.

It also had darkened headlight housings, fog lights with dark chrome surrounds and side mirrors with darkened chrome details underscored the vehicle’s sophisticated presence. And there was a moonroof too.

We were fascinated because the Land Cruiser Heritage had a split liftgate. The top half was power activated. The bottom half had to be lowered manually and it also held a tool kit with pliers, wrenches, and a jack. The spare tire was on the outside underneath the cargo area.

It had skid plates that helped to protect the front suspension, radiator, fuel tank, and transfer case, and Multi-Terrain Monitor provided nearly 360-degree visibility on tight trails. Equipped with a towing package, the Land Cruiser can pull up to an 8,100 lb. trailer.

There was a 360-degree camera, rearview camera, blind side alert and the usual condiments: satellite radio, voice controls, LED headlights and daytime running lights, keyless entry and keyless start and the steering wheel was heated too.

Toyota only builds a limited number of Land Cruiser Heritage Editions each year. This one was $89,239.