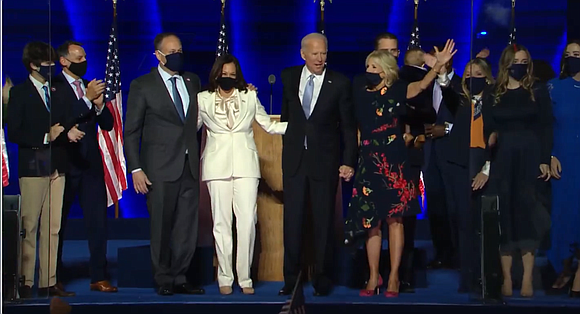 When news of President-elect Joe Biden’s projected victory finally emerged late Saturday morning, and vote totals in enough of the key states showed he had more than the necessary 270 electoral votes to defeat incumbent President Donald Trump, cities across the nation erupted in celebration.

Supporters poured out onto streets throughout Chicagoland and in other major cities to celebrate and many Illinois legislators took to social media or released statements congratulating President-elect Biden and Vice President-elect Kamala Harris.

Illinois Sen. Dick Durbin on Twitter said President-elect Joe Biden is a public servant in the “best sense of the term. He has taken the strength and wisdom he learned from his family, and his own experiences with loss and hardship, and he has used those lessons to give millions of Americans reasons to hope and ways to heal. And by his side is an outstanding Vice President-elect in my colleague, Kamala Harris. Her historic election shows girls, women, and people of color across this country that your future is limitless. I look forward to working with the Biden-Harris Administration to tackle this coronavirus pandemic head-on, get our economy back on track, and move our country forward.

“The last four years,” Durbin added, “did not break America, but revealed what was already broken. Now we must come together to heal some of the terrible wounds of our past, and together, create a better, more just, more prosperous America – not just for ourselves, but for our children and grandchildren.

Congressman Bill Foster (D-Illinois) said “after four long years of divisive and dishonest leadership, the American people have rendered the ultimate judgement with their legally cast votes. “I congratulate President-elect Joe Biden and Vice President-elect Kamala Harris on their historic victory, and I look forward to working with them on the challenges our country faces. We need to bridge the divisions of the past four years and return to leadership that seeks to unite the American people,” Foster added.

“This isn't a political victory, it’s a victory for American democracy and the rule of law.”

“It may have taken some time, but today I know that the American people can breathe a sigh of relief with the historic election of Joe Biden and Kamala Harris as the next President and Vice President of the United States,” Rush said.

“This election we saw the most votes ever cast for a Presidential candidate and the first Black woman and Indian-American woman elected to the office of Vice Presidency.”

Rush added that taken together, these remarkable feats are “a testament to the strength of our democracy and the progress our country has made over our lifetimes. Moreover, this election proved that the American people understood the urgency of this moment and rose to the occasion in order to bring decency and dignity back to the White House and to restore the very soul of our nation.

“We know there is still much work to be done, but I am confident that the American people have chosen courageous champions to lead us along the way. I look forward to working with Joe and Kamala and congratulate them on their hard-won victory. Let the great American reconciliation begin,”