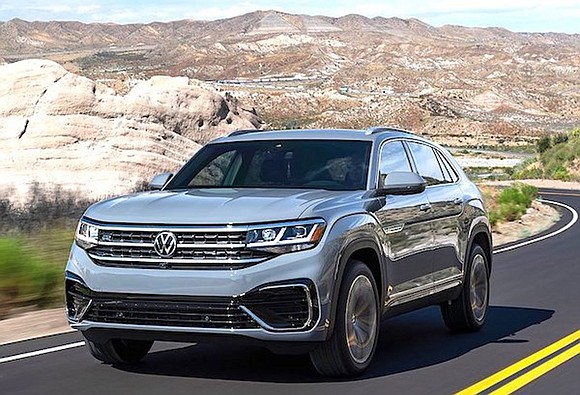 Often great design is about lines, straight and to the point.

That is what struck us about the 2021 Volkswagen Atlas. The sides of the vehicle were crisp.

For the new model year, the chassis remains unchanged, but the front and rear bumpers have been restyled. The three-bar grille extended into the front headlights. This new model featured LED lighting all round, including low beams. Even the turn signal lights were LED. The front lights were also adaptive.

We had the SEL R-Line. It had special badging, unique front and rear bumpers, what VW termed “stylish intakes,” side skirts and as with all Atlas models 8.0-inches of ground clearance. It also had 21-inch alloy wheels.

The Volkswagen Atlas was a sizable three-row crossover. But it didn’t drive big.

It was powered by a 3.6-liter V6 that made 276 horsepower and 266 pound-feet of torque at a relatively low 2,750 RPM. Transmuting that power to the pavement was an eight-speed automatic transmission.

We had the front-wheel drive Atlas. It got 17 mpg in the city, 23 mpg on the highway and 19 mpg combined with stop and go.

This model was very maneuverable. It responded to driver input almost instantly. There was no lag time between turning the wheel and the 2021 Atlas responding.

Our interior was black with stitching and was digital. It was functional with heated front seats, USB jacks fore and aft, an auxiliary plug, and a 115V grounded plug in the second row.

The Atlas had a high seating position with easy access to the controls, most of them were digital, in the front row. The second-row seats articulated back and forth, and the seat backs titled.

We thought getting into the third-row seats was trouble-free. Just lift a latch on the seat shoulder and it slid and titled forward providing entry to the third row. Once back there, we thought it a bit close, but second row seat articulation made it relatively comfortable.

The cargo area had a bin for groceries or whatever else that the owner did not want to roll around. We also thought the third-row seats flipped forward easily enough creating a flat cargo floor.

The 2021 Volkswagen Atlas had a power liftgate that would open without using our hands. We’ve never been able to get one of these to work and that did not change with this Atlas. It must be our shoes.

Across all three rows, an array of available inputs, (12V, USB, auxiliary), cup holders, bottle holders, storage nets, and cargo containers provide convenience for all passengers. The VW Atlas had a maximum cargo volume of 96.8 cu-ft behind the front-row seats when all rear seats are folded down. With just the third row folded, cargo capacity is 55.5 cu-ft, and with all seats up, cargo capacity is 20.6 cu-ft.

The subscription for the satellite radio had expired so we streamed music from our smartphone.

The 2021 Atlas had the next generation of CAR-Net, Volkswagen’s connectivity software that was first introduced in 2014. It is a mobile app that provides a lengthy list of no charge services for five years, said Volkswagen.

Features included remote start, remote door lock and unlock, remote honk and flash of lights, last parked location, and remote vehicle status display, which provides information on fuel level, mileage, and door and window status. It can even connect with a smartwatch.

Of course, roadside assistance, vehicle health, anti-theft alert and stolen vehicle location were part of the package of services.

Certainly, the traditional equipment was available on the Atlas: satellite radio, voice controls, a navigation system, lane departure alert with aggressive lane keeping assist, blindside alert, a rearview camera, adaptive cruise control, forward collision warning with automatic braking and automatic high beams were just some of the technology and conveniences that the Atlas was equipped with.