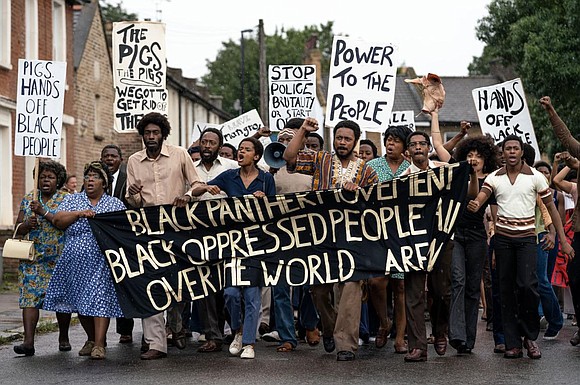 “I dedicated these films to George Floyd and all the other Black people that have been murdered, seen or unseen, because of who they are, in the US, UK and elsewhere,” director and co-writer (with Alastair Siddons) Steve McQueen said of his new BBC and Amazon Prime Video series, “Small Axe,” an anthology of five films on racial strife in Britain, that premieres Friday, Nov. 20 with the film “Mangrove.”

The film series is the first directorial outing for McQueen since “Widows,” the crime caper starring Viola Davis and Liam Neeson, which opened the Chicago International Film Festival in 2018.

McQueen won the Best Director Oscar for “12Years A Slave” in 2014, the first Black director to be so honored. He was knighted by the Queen of England in the 2020 New Year Honours, for services to film. He was also was honored with the Lifetime Achievement Award presented at the 20th Anniversary of Black Perspectives at the 2016 Chicago International Film Festival.

Mangrove will premiere on Amazon Prime Video, Friday, Nov. 20 as the first of five films in the Small Axe Anthology. Visit primvideo.com for more information.

Mangrove is to British Blacks what Selma is to Black Americans. The film is set in London’s Notting Hill area in 1968. It is the scene of the Mangrove March for equal rights for Blacks in Britain that culminated in a violent and bloody confrontation with British police. African Americans often compare the protest to the March to Selma in the same year. Both of these seminal events mark their 50th anniversary this year.

We meet Frank Crichlow as he walks to his new restaurant, Mangrove. Already his establishment is the object of police surveillance and racial animus.

“The problem with the Black man,” we hear Police constable Pulley (played with venomous disdain by Sam Spruell) intone to a young recruit as he sits in an unmarked police car outside the restaurant, “is that he doesn’t know his place. He has to be nudged into it. I remember the days when we'd bring the bloody battalion down on him!”

It’s not long after that declaration, that police raid Mangrove, and Crichlow and his staff and customers roughed up and arrested, the first of many such confrontations.

The local Black Panther Party, in the person of the fiery and inspirationally poetic Altheia Jones (Letitia Wright, the Guyanese-British actress best known for her starring role in the adventure hit Black Panther -no pun intended). After some initial resistance (“This is a respectful restaurant, not a battleground!”) Crichlow agrees to let the Panthers use his upstairs office space to hold their meetings, in exchange for helping protection and a side offer of helping him round up musicians for the Tin Pan drum parade at Carnival. (He just happens to keep a brace of tin drums on hand in case his customers and staff decide to break out in impromptu song and a line dance out into the street.)

Mangrove quickly becomes the heart and soul of the British Caribbean community. There's one charming scene where one of the local women, probably a domestic by trade, presents Chrichlow with an old bent Holiday cookie tin, filled with her scraped together savings. She offers the money to Frank to help him keep the place together after weeks of customers staying away because of fear of the police raids. "This makes me happy," she tells him as he reluctantly accepts the offering. Inside the restaurant, there are posters on the walls depicting images of past heroic figures; Paul Bogle, the Jamaican Baptist preacher who became the National Hero of Jamaica for leading the Morant Bay rebellion. Like the Mangrove March, it began as a simple protest march against slavery in 1865 and grew into a full-scale revolt. The most prominent image is that of Jean-Jacques Dessalines, leader of the Haitian Revolution and the first ruler of an independent Haiti in 1805. He is considered the Founding Father of Haiti, which was the first nation in the Americas to abolish slavery.

Black West Indian culture is on vivid display in this film, thanks to a dazzling production designed by Helen Scott and eye-popping costumes by Lisa Duncan. Shabier Kirchner, who shot all of the Small Axe Anthology films, did the electrifying cinematography in Mangrove.

The Carnival scene is a joy to behold. (Over the years, the Notting Hill area became an attraction for people who came from far and wide to experience the annual Noting Hill Carnival, a showcase for West Indian and Caribbean culture. The area, sadly, has since become gentrified, and casts a mere shadow of its former vibrancy).

To show the callousness of the police, there's a scene where the cops are playing a game of cards in the patrol room. Whoever draws the Ace of Spades is to go out and beat and arrest the first Black person he see's. The new recruit is visibly shocked by the travesty, but participates nonetheless. This ritualized race-baiting was commonplace.

After repeated assaults on the Mangrove by police, a plan to hold a protest is hatched. “Enough is enough,” we hear one of the movement’s leaders, aspiring lawyer Darcus Howe (Malachi Kirby- a British actor best known for the 2016 Roots reboot as Kunta Kinte froom Alex Haley’s groundbreaking American slavery drama series on ABC-TV, Black Mirror, also in 2016 and more recently, Curfew, 2019). “We must take to the streets.”

We also meet Howe’s partner, and the eventual mother of their child, the mixed-racial Barbara Reese (Rochenda Sandall-a British TV star, known in that country for her starring role as the villain Lisa McQueen in the BBC crime drama Line of Duty, now heading into its sixth season). With her huge Afro, light skin and penetrating eyes, she’s almost a dead ringer for the American Black Panther leader Kathleen Cleaver.

We meet her early on in the cramped apartment she shares with Howe. Their differences in background and skin color are a constant source of friction between the two. “You grew up in a society where Black people were the majority, I, on the other hand, was always the minority. From day one, I was judged too Negroid to be adopted!”

The Mangrove March is depicted in graphic detail. Its images will look familiar to veterans of similar protests in this country.

The result of the Mangrove March was a trial that dominated the British press and that nation’s attention for 11 years. It was the OJ trial of their time.

The last half of the film portrays the trial in detail, with some brilliant turns by the cast. The courtroom drama is, in itself, a masterpiece of the genre. There's some brilliant speechifying by the characters. These scenes anchor the film.The ringleader, Howe, delivers a brilliant self-defense that makes the Johnny Cochran 'if the glove don't fit' defense in the OJ trial seem like child's play.

Stephen O’Neill is particularly imperious as the Magistrate and Sam Spruell is the crooked, racist Pc Pulley to the nth degree. His mendacity at trial results in the acquittal of the Mangrove Nine.

Mangrove was a symbol of racial strife and the centrifugal force that galvanized London’s West Indian community.

Crichlow and his crew endured many more raids and three more trials over the next two decades. The restaurant finally closed its doors for good in 1992.

“If you are the big tree, we are the small axe. Black Lives Matter!” Those words are McQueen’s summation of the Small Axe series. In its totality, Mangrove is a tribute to the beginning of a movement that has reverberated around the world. Decades later, it birthed Black Lives Matter around the globe. Mangrove and the Small Axe anthology are a tribute to that spirit. Visit primevideo.com for more.