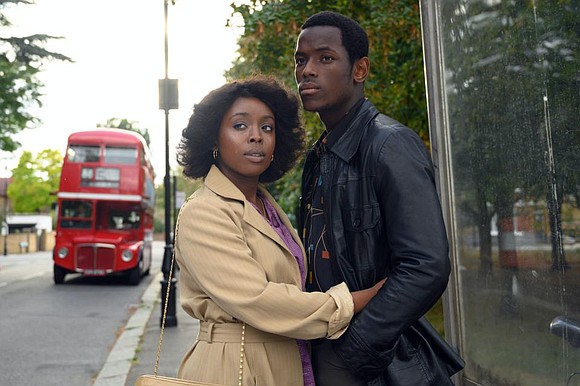 Lovers Rock is the second part of McQueen’s new Small Axe anthology. McQueen, who made history as the first black director to win the Academy Award for Best Picture in 2014 for his 12 Years A Slave, is drawing on his roots in London’s Black West Indian community to create his ‘Small Axe’ miniseries of five films: Lover’s Rock, Mangrove, Red, White and Blue, Alex Wheatle and Education. The films will begin on BBC One and stream on Amazon Prime Video beginning with Mangrove November 20.

The term ‘Small Axe’ comes from a West Indian proverb that was popularized by Bob Marley in The Wailers song “Small Axe” from the 1973 album “Burnin’.” “If you are a big tree, we are the small axe,” McQueen recounts. “This speaks to our strength in numbers and to our resilience.

“These films tell the little-known history of Black pride that was demonstrated in the Mangrove March. While these stories are unique to British history, they resonate globally against the backdrop of Black Lives Matter.”

The New York Film Festival is, so far, the largest event of its type to be held in this country since the start of the pandemic. The film festival community has been hit hard worldwide by the pandemic. In fact, Lovers Rock was scheduled to have its World Premiere at Cannes, but that prestigious festival was canceled.

The setting for Lovers Rock is a house party in 1980 in London’s West Indian community in Noting Hill, South London. The area is completely gentrified now, so the film is as much a personal love letter from Steve McQueen as it is an intimate look at a people and their culture.

“There’s a hole in British history,” McQueen postulates, “because Black people were largely ignored from the 1960s to the 1980s. These films fill that void.” The setting for Lover’s Rock, at a house party in Noting Hill, is of special significance to the director.

“I recall as a child that my parents used to give these parties,” McQueen recalled in a Zoom news conference with reporters covering the 58th New York Film Festival. “I remember waking up in the morning with coats piled on top of me.”

The house parties were as much a form of entertainment as they were a commentary on the state of things at the time. The parties partially grew out of necessity. “Blacks were not welcome at London’s white dance clubs, so Black people had to create their own,” McQueen elaborated. “For a small admission fee and the price of some home-cooked food and drink, they could dress up and enjoy a night out.”

The opening scene sets the mood, with the women in the kitchen singing off key to Janet Kaye’s Silly Games while they prepare the curried goat for the party. The sound of their feet softly rubbing on the wood floor as they sway to the music segues to the pulsing reggae beat that will dominate the film.

We see a young woman slipping out of the house in her Sunday best to meet her girlfriend to head to the party. All is in readiness at the house. Once the room is cleared, the furniture set in the garden, and the giant speakers set in place, its non- stop thumping reggae, classic R ‘n B and steamy grinding to the beat. It is a moving portrait of ecstasy. Lover’s Rock!

“That was my aunt,” McQueen volunteers, speaking of the teenaged girl who snuck out in the film. “In fact, the whole story is based on my aunt’s experience. She came from a highly religious family that didn’t allow her to go to dances and parties. So she had to sneak out and then sneak back into the house in time to go to church on Sunday morning.”

Outside of the house, a group of white teens look on the developing scene skeptically, a sign of the creeping gentrification of the time and also a hint of the shadow of racism that permeated the atmosphere.

The film stars newcomer Amarah-Jae St. Aubyn as Martha and Michael Ward (Blue Story-2011, Dev’s Diary-2018), as her eventual love interest, Franklyn. The two are magical together. It would be great to see the pair star in a future vehicle solely intended for them.

The other cast members are similarly engaging. Shaniquia Okwok is ebullient as Martha’s friend and partner-in-crime Patty. Cynthia (Ellis George) is the girl who lives in the duplex where the party is being held. The party also doubles as her 17th birthday celebration, which we see in counterpoint to some of the seamier elements of the evening.

We meet Martha’s juvenile delinquent cousin Clifton (Kedar Williams-Stirling) early in the film jimmying open the coin box of a pay phone to get money to pay for entry to the party. When he arrives, there’s tension between he and Martha. It quickly escalates into a shouting match. The West Indian dialogue is a bit hard to follow, but you get the idea. The others try to kick him out, but he persists and Bogarts his way in. Hey, there’s a scene like this at just about any family gathering, right? Unfortunately, in today’s world, the party who felt he was wronged would probably leave and come back with a gun and shoot the place up!

The party moves on, thanks to the surging DJ crew, led by Samson (Kadeem Ramsey). The pulsating reggae rhythms interspersed with classic R and B and Disco Beats (Sister Sledge's "He's the Greatest Dancer," Barry Biggs' reggae spin on "Hey There Lonely Girl," and Carl Douglas' "Kung Fu Fighting, among others)

fill the air, along with the smell of ganja.

The heady atmosphere is intoxicating, urging on the undulating moves, grinding and grooves of the young men and women eager to gain each other’s favor. The dance progresses to a foot stomping, chest thumping frenzy. “Let the Lion out!” the DJ yells as the party reaches a fever pitch.

Lover’s Rock made its official bow as the Opening-Night Main Slate entry of the 58th New York Film Festival. Two other segments of the Small Axe miniseries, Mangrove, and Red, White and Blue also debut at NYFF ahead of their fall premiere on Amazon Prime.

Lovers Rock is co-written by rapper, novelist and movie producer Courtia Newland and McQueen. Based on the director’s own story, the film pairs Martha and Franklyn as the would-be lovers that finally wend their way into each other’s lives.

Along the way, there’s a near-rape. Its all just part of the heady scene in Lovers Rock, which is captured brilliantly and in real-time with the high energy camera work of Shabier Kirchner and the excellent production design of Helen Scott. The terrific costumes of Jacqueline Durran capture the flamboyant flair and Caribbean color of the period. Director Steve McQueen brought to bear all of his expertise in the visual arts to create a stylish and heartfelt homage to the thriving culture that spawned him and a new generation. Lovers Rock debuts Friday, Nov. 27 For more on Small Axe, visit primevideo.com.