Preliminary injunction granted on behalf of the Village of Elwood 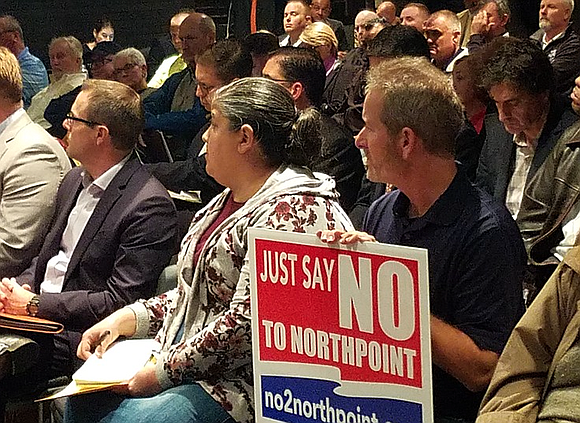 A Will County Circuit Court Judge on Monday approved a Temporary Restraining Order on behalf of the Village of Elwood, in effect temporarily putting the brakes on Joliet's plans for East Gate - Logistics Park Chicago, also known as the NorthPoint development.

The judge's decision to grant Elwood the preliminary injunction temporarily prevents the City of Joliet from annexing and zoning any of the property for the NorthPoint development.

The city council had planned to vote tonight on ordinances for the annexation and zoning of some of the parcels to make way for the business park development. Upon learning of the judge's ruling, however, Jim Hock, Joliet's interim City Manager, removed the ordinances from the agenda.

The City of Joliet’s joint motion to dismiss was partially granted and the city's legal staff will determine how to proceed in light of the rulings, according to Hock.

Elwood alleges that the public hearing at the Joliet Plan Commission held on Feb. 24 was legally deficient in that the legal notice was defective, the special use was not adequately defined, and due process was violated due to the four-minute limit for each speaker, violation of statutute requiring testimony be under oath. Additional allegations were filed by the plaintiff in regards to the City Council's public hearing on the pre-annexation agreement for NorthPoint held on April 13, 14, 15, 16 and 17.

Meanwhile, attorneys for East Gate - Logistics Park Chicago and the City of Joliet had filed a motion to dismiss the case and are challenging the legal sufficiency of the complaint by asserting that the facts as pleaded are insufficient on the face of the complaint to state a cause of action.

Joliet city officials and NorthPoint, however, have no intention of discontinuing the project.

"It’s our intention to move forward on the project and the judge’s ruling on the Temporary Restraining Order gives us several options," said Joliet City Councilman Larry Hug, who is chairman of the council's Economic Development Committee. "We’ll pick an appropriate avenue and move forward. We just have to go through at the legal process."

Stop NorthPoint, Gallagher added, "intends to file our complaint very soon. We intend to permanently stop this project, not just delay it.

"We have an expansive complaint that is very detailed and our team of expert attorneys are giving it a final review," she said.

The proposed NorthPoint development, according to Joliet city officials, bring tax revenue, construction jobs and other employment into the Joliet region.

The Temporary Restraining Order issued on behalf of the Village of Elwood is not the first legal snag Joliet has run into with the NorthPoint development. According to Hock, officials from the Manhattan Elwood Public Library District contacted the city’s Corporate Council and said they never received notice back in April of the pre-annexation agreement between NorthPoint Development and the City of Joliet.

The Joliet City Council was scheduled to vote Sept. 1 on the final annexation agreement of more than 50 percent of the properties in the proposed development, but Hock recommended the council hold off tonight's city council meeting to vote on the agreement. However, now with the Elwood ruling, that vote has also been postponed.

NorthPoint Development’s plans call for Joliet to annex 1,260 acres a half-mile south of Breen Road and east of Chicago Road to develop a business park. NorthPoint is continue to acquire the land needed for the development and at this point has purchased more than 50 percent of that property.

In late April, the Joliet City Council took the first step toward bringing the controversial business park proposal to fruition, despite community groups vehemently opposing it. Hundreds of people spoke out against the development at call-in public hearings at the height of the Coronavirus pandemic.

Following a public hearing that lasted four days and included comments or e-mails from nearly 300 residents - many opposed to the development - the City Council voted 6-3 in favor of the pre-annexation agreement.

Groups opposed to the development continue to voice their opposition to it and attempt to stop it from coming to fruition.

NorthPoint opponents sent a letter to the Federal Aviation Administration asking it to conduct a review of impacts on surrounding historical sights, as required by the National Historic Preservation Act. This was in response to the FAA's letter of no objection concerning NorthPoint's request to annex a small piece of FAA property into Joliet. Without that annexation, NorthPoint would not have the necessary property to connect all the parcels and annex into Joliet.

Fifteen historic sites have been identified in Jackson Township, including Midewin National Tallgrass Prairie, which has Grant Creek, a Native American archeological dig, according to Gallagher. The bridge that NorthPoint plans to build as a dedicated truck route over Illinois 53 replaces a portion of Old Route 66 along Mississippi Avenue, Gallagher has said.

According to Hug, the bridge portion of the NorthPoint development will address two issues: No. 1 it maintains the integrity of NorthPoint’s closed loop of one way in and out for trucks and the second issue it addresses is some of CenterPoint’s truck traffic also will utilize the bridge therefore taking some of that traffic off of local roads,