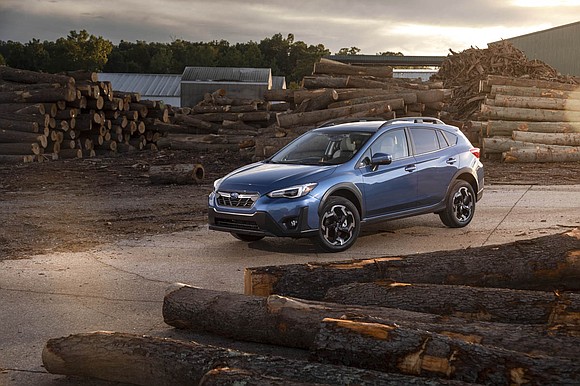 Subaru has refreshed its Crosstrek lineup, adding a Sport model with a larger engine.

It made its 2.5-liter four-cylinder Boxer engine available on the Sport trim line with dual function X-MODE, with interior and exterior accents and a durable upholstery that it has branded StarTex.

Pressing the X-Mode switch activates 5 different forms of control to limit slipping tires when off road:

X-Mode keeps the transmission in a lower gear so that engine power can be delivered stronger. This shifting pattern, while X-Mode is ON, lets the driver make the most of the power that is available.

AWD control is improved by raising the front/rear coupling force when X-Mode is ON, which helps the driver drive power more evenly between the four wheels. This maximizes the traction of the tires.

The VDC system, when X-Mode is on, includes a specially tuned "Enhanced LSD Control". For example, if the left and right wheels are behaving differently, the system applies brakes only to wheels that are slipping. Compared to ordinary operation, the brakes are applied a lot earlier when X-Mode is ON, resulting in LSD control activating much faster.

We found this engine to be more than adequate on the two lanes roads here in Northeast Ohio. Acceleration was good, the crossover’s torque was enough to get it up and over the area’s hills with little sound of strain from the engine.

This was hilly corn country where roads like 407, 580 and 312 cut through corn fields where you couldn’t see to the other side. We were also on the alert for horse and buggies. This area has the largest concentration of Amish in the country.

It was raining, it was foggy, and it was humid. Worse, because of COVID-19 we were driving alone and worse yet, the route was so rural that we had to read the directions rather than load them into the small crossover’s navigations system. It made for a strenuous drive.

Still, the Crosstrek Sport was comfortable. It was easy to drive and the steering wheel felt food in our hands. We drove about 90 miles before lunch and traversed at least four significant of gravel roads.

The Subaru brand has a reputation for activity of one sort or another. That is the top reason why consumers purchase the brand and when they’re done, they pass the on vehicle to someone like a child. You won’t find many used Subaru models on the market.

Anyway, we turned the volume down on our Subaru while on the gravel roads and let the vehicle talk to us.

You could hear the solidness in the build quality. The suspension was great. Although there were small potholes and the roads were wet, the Subaru Crosstrek Sport held its track and was relatively quiet.

The Crosstrek Sport had a new front end design and it also had new springs and shocks which gave it better body control and better steering. It could also tow up to 1,500 lbs.

Our Crosstrek had a new grille and front bumper. There were also beefed up wheel arches. On our Sport there were 17-inch wheels. The Limited had 18-inch wheels.

There is a 2.0-liter Boxer engine that makes 152 horsepower and 145 pound-feet of torque. Its comes with either a six-speed manual or a CVT, depending on the trim level. The CVT gets 28 mpg in the city, 33 mpg on the highway and 30 mpg combined.

The six-speed manual gets 22 mpg in the city, 29 mpg on the highway and 25 mpg combined.

A $1,600 option package is comprised of blind spot detection with lane assist and rear cross-traffic left and 8.0-inch touch screen with the Starlink Multimedia Plus System.

The Subaru Crosstrek will remind the driver that something or someone is in the back seat.

The Crosstrek has Android Auto and Apple CarPlay. It had voice controls, satellite radio, keyless entry and start stop and a security system with engine immobilizer.

The Subaru Crosstrek can also be outfitted with a SI-Drive. It is a powertrain performance management system that allows the driver to tailor throttle characteristics by choosing between intelligent and sport modes.

There’s a manual mode function on the CVT that simulates an eight-speed tranny; it has paddle shifters. The top of the line Limited had adaptive LED headlights, daytime running lights and frog lights.

STARLINK is Subaru’s multimedia system that integrates compatible smartphones for audio streaming, Wi-Fi hotspots and voice activated controls for phone and radio. There is also voice activated navigation. It can also be equipped with remote engine start.