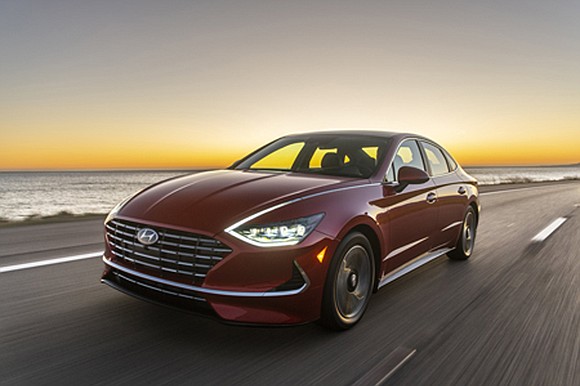 When we first approached the car, we thought it had a panoramic roof. But closer inspection revealed that this sedan had a solar panel roof.

According to Hyundai, this system charges the 12-volt battery and the hybrid batteries as well. It puts out 205 watts of electricity. Hyundai said mileage increases by two miles per day with a solar roof. And it helps prevent battery discharge from the infotainment or HVAC systems when the car is off.

The interior layout was uncluttered. We don’t think there was an analogue instrument anywhere. The instruments were digital, and it had a pushbutton gear selector. The speedometer was on the left in front of the driver while the power and charging gauge was on the right.

There was stitching on the doors, the heated and cooled seats, and the dash. We do wish the dash was a little softer, but it did not feel like a hard piece of plastic.

We climbed in the backseats and found that area expansive. There was plenty of head and hip room we were surprised by the amount of legroom we had, especially since the front seats were let back. Three people could sit abreast in the back seats without any problems.

The powertrain was mated to a six-speed automatic transmission with paddle shifters. The car had an EPA rating of 45 mpg in the city, 51 mpg on the highway and 47 mpg combined.

We had the opportunity to really let the rubber meet the road when we took a two-night three-day trip to Berlin, Ohio. It is part of an area that has the largest Amish community in the country.

Anyway, it is 200 miles from here. The route that the navigation system selected encompassed I-75 South, the Ohio Turn Pike and then a series of two-lane highways through what we can only call sweet corn country.

Interstates are where the weaknesses of hybrids tend to show themselves. But that Sonata had plenty of cruising power as well as passing oomph. There were four drive modes and we did not use any of them.

We tried the car’s lane centering system. It was impressive, even following a couple of curves in the road. But we noticed that this technology was like there was another set of hands on the wheel and we eventually turned it off.

Once there, we parked the Sonata and did what we were there to do. We left in the morning, before sunrise. And thats when got the chance to experience the car’s automatic high beams. This was hilly country, not pronounced inclines. But it was full of rises; some of them in quick succession.

The high beams automatically came on when needed, and that was a lot. Without them, we would have spent a lot of time clicking them on and off. We got back with gasoline to spare. When we were examining the car preparing to write this, we found the Sonata had travelled 503.8 miles, averaged 48.8 mpg, and still had a range of 110 miles left in the tank.

We had the Limited trim line and there were no options. Even the head up display was standard. For $36,295 as tested, the 2020 Hyundai Sonata Hybrid was a good buy.