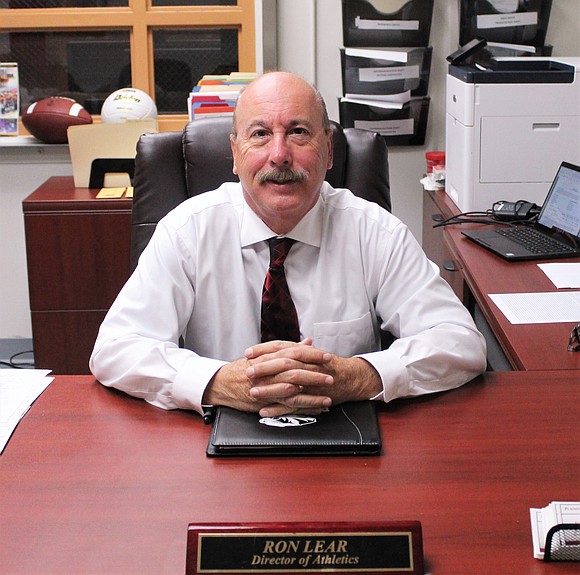 “I am really proud to be one of the few people that has accomplished the highest certification in the nation for an athletic director,” said Lear, who has been the Plainfield North High School athletic director since 2011.

“I work every single day to be better and to try to do as much as I can to help the students and the coaches,” he added.

Lear had been thinking about the process for about three years but began working in earnest toward his CMAA designation at the beginning of the COVID-19 pandemic, he said.

“When the pandemic hit in March, I decided to start focusing on something to make sure I was staying up to date on things. I wanted to use my free time wisely to become a better athletic director,” he added.

To earn the CMAA designation, Lear completed a series of classes, seminars, and a project. For the project, Lear created a new coach handbook for Plainfield North High School, he said.

“When I looked at our new coaches, some of which are first-time coaches starting off as head coaches, I know they may not know how to do certain things such as how to handle collecting equipment, communicating with parents and even discipline,” Lear said.

“I made the handbook because I am trying to help new coaches navigate issues I have seen in the past before it happens, and to mentor them so they can become better coaches,” said Lear, who also serves as the Division III representative for the Illinois Athletic Directors Association.

Lear has gained a lot of experience throughout his 15 years in the athletic department at PNHS, but he says it is still important to be a lifelong learner.

“If you stay with the status quo, you are going to fall behind,” Lear said.

“Things change every year in our job. Getting my CMAA made me a better athletic director and that is what matters. My coaches and athletes are going to better because of it. I want to do whatever I can to make this place the best place it can be,” he said.