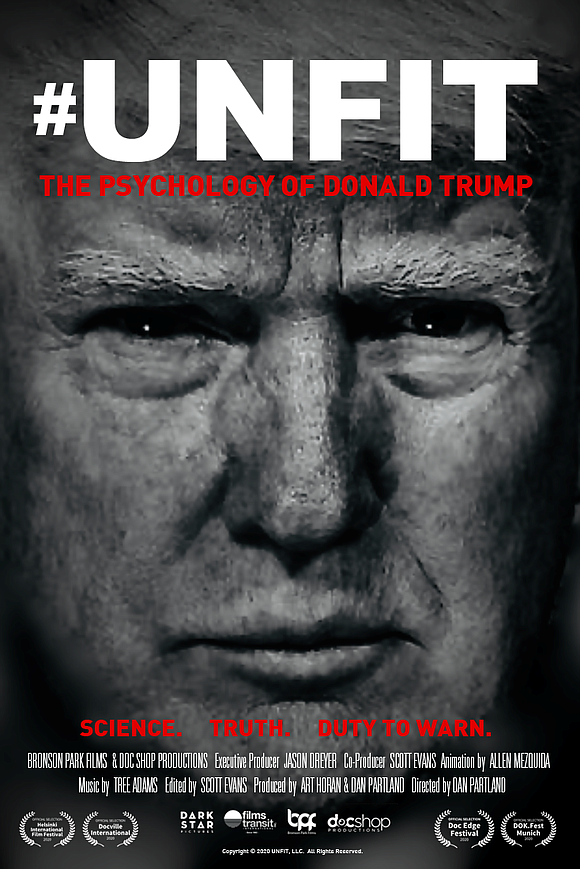 “Is Donald Trump fit to serve as President and Commander In Chief? I can answer that with one word—No!” So says psychiatrist and former Georgetown University professor Justin Frank at the outset of director Dan Partland’s startling documentary #UNFIT: The Psychology of Donald Trump, now streaming on all major platforms.

“Trump is a sociopath, a sadist, a con artist, a racist, a misogynist, a sexist in general, and I think it is a problem,” Frank expounds, and that’s just within the first 10 minutes of the film.

UNFIT begins with Day One of the Trump presidency when then-Press Secretary Sean Spicer gives an impromptu news conference in which he inflates the size of the Inauguration Day crowd. Citing “false reporting” by the media, Spicer declares, “This was the largest audience to witness an Inauguration, PERIOD!” When pressed by NBC’s Meet The Press host Chuck Todd on the matter, the President’s personal advisor, Kellyanne Conway profers, “Sean Spicer, our press secretary, offered ‘alternative facts,’” to which Todd, retorted; “’Alternative Facts’ are not Facts. They’re Falsehoods!”

Her husband, George Conway, is an attorney and co-founder of the Lincoln Project, an anti-Trump group that has been running negative TV ads during the current presidential campaign. He also was one of the attorneys who represented Paul Jones in her lawsuit against U.S. president Bill Clinton. Conway says he first started suspecting that something was wrong with the President’s state of mind when he spotted an April, 2017 article by Alex Morris in Rolling Stone magazine entitled “Trump’s Mental Health: Is Pathological Narcissism the Key to Trump’s Behavior?”

Conway says a light bulb went off in his head. “That’s it. He’s a malignant narcissist.”

In an emotional moment later in the film, Conway is nearly in tears. In discussing whether or not Donald Trump is a racist, as many have charged, he reveals that he is half Filipino. “My mother came to the United States from the Philippines in the late 1950s. So I’m half Filipino, the other half of me is part Irish, part Scottish, a classic American ’mutt.’ I’ve always assumed that people aren’t racist but (after Trump’s ‘Good People on Both Sides’ comment following the Tiki Torch parade in Charlottesville), I guess some people are.”

UNFIT continues along in that vein, with corroboration from the aforementioned Dr. Frank, former professor at Georgetown University and author of the book “Trump on the Couch,” John Gartner, psychologist and professor at Johns Hopkins University and author of the book “Duty to Warn,” Lance Dodes, Psychiatrist and author of “Breaking Addiction,” Malcolm Nance, author of “The Plot to Betray America,” Anthony Scarmamucci, former White House Communications Director and author, “Trump: The Blue Collar President, and Ruth Ben-Ghiat, Historian and Author, “Strongmen,” among others.

Most notable is Tony Schwartz, author, with Trump, of “The Art of the Deal” which catapulted Trump into the national spotlight and an eventual groundbreaking Reality TV show, The Apprentice, which engraved his persona into the national psyche with his signature phrase ‘You’re Fired!”

Schwartz faces the camera and says emphatically to MSNBCs disgraced ‘Hardball’ host Chris Matthews, “One of the problems here is that Donald Trump doesn’t have empathy. He does not feel emotions like care and…’He’s a sociopath?” Matthews interjects in his classic, annoying fashion. “Yes, there is no question that he is a sociopath. Which means that he has neither a conscience nor a heart.”

From the moment Donald Trump descends the elevator at his eponymous Trump Tower, announcing his run for the presidency, to the recent day in July when the United States records its 100,000th death due to the Corona Virus, #UNFIT presents a searing portrait of a mental and political crisis unfolding in real time. The film asserts that Donald Trump represents a clear and present danger.

UNFIT also explores in depth the relationship between Donald Trump and his father, Fred Trump, the legendary real estate developer who is largely responsible for reshaping the real estate landscape of Queens and The Bronx. Known for his ruthlessness and racial bias, he was sued by the federal government for racial discrimination. Trump proudly admits that he learned everything that he knows, literally, at his father’s knee.

The apple did not fall far from the tree. In a 1996 interview with the BBC show Hard Talk, a young Donald Trump tells an interviewer, “I believe in an eye for an eye. If someone goes out of their way to hurt you, I think that, if you have the opportunity, you should go out of your way to do a number on them.” The look in his eyes as he makes that admission is chilling.

UNFIT: The Psychology of Donald Trump is the new documentary now playing on all On Demand platforms that slices and dices the precarious mental state of the current sitting president. You must watch this film before you vote.

Multi-Emmy winning director Dan Partland (A and E’s Intervention, CNN’s The Sixties, and American Race and Charles Barkley for TNT) gives a jaw-dropping analysis of the dangerous behavior of the self-proclaimed ‘stable genius.’ Further drawing on analogies and gripping file film charting the rise of Benito Mussolini in Italy in the 1920s, and Adolf Hitler in the 1930s, the film paints a grim portrait.

In an article entitled “Tsunami of Untruths,” The Washington Post estimates that the president has hit a milestone by making more than 20,000 false or misleading claims while in office.

“Pursuing Truth is to the mind like food is to the body,” Dr. Frank declares at the conclusion of the film. “Without pursuing Truth, the psyche starves. And Trump’s psyche has been starving for a long time.”

UNFIT is On Demand everywhere. Visit unfitfilm.com for more information.