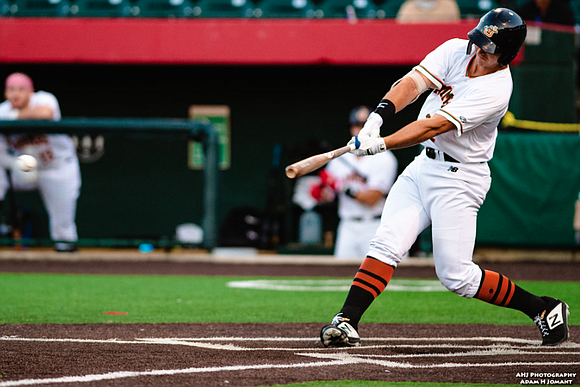 The Joliet Slammers ended their City of Champions Cup season with a victory, edging the NERDS Herd 4-3. The Slammers bullpen played a crucial role in the win, combining for six shutout innings, and catcher Brian Parreira crushed a no-doubt solo shot in the fifth to give the Slammers the lead for good.

Parreira was the hero for the Slammers in Sunday's narrow victory. The contest was a back-and-forth affair throughout the first three innings, but the Slammers backstop and newly-voted City of Champions Cup All-Star clubbed a homer onto Power Alley in the fifth inning to give the Slammers a 4-3 lead.

The Slammers bullpen would not need any more insurance runs. Christian Tripp, Andrew Cartier, Joba Ferrell, Mario Samuel, Nathan Alexander and Trevor Charpie each delivered a scoreless inning in relief for the Slammers to shut down the NERDS Herd lineup for the final two-thirds of the game. Cartier earned the win for pitching the top half of the fifth before the Slammers took the lead in the bottom half. Charpie closed the game out with a three-strikeout ninth, stranding the tying run on third to earn a gutsy fourth save of the season.

Designated hitter Noah Vaughan, right fielder Jacob Crum and shortstop Zach Kirtley all contributed to the Slammers win at the plate. Vaughan was 1-for-1 with two walks, an RBI and a run scored. He ripped a double and scored in the first inning and drew a bases-loaded walk in the second inning. Kirtley was 1-for-4, batting Vaughan in with an RBI single to left field in the first inning. Crum was 2-for-3 with a pair of singles, a stolen base and a run scored on Vaughan's second-inning walk.

Right fielder Ashton Creal had the biggest hit of the night for the NERDS Herd in the loss. In the second inning, Creal obliterated an 0-2 pitch over the left field wall for his first home run of the season. Third baseman James Free also had a productive day at the plate in the loss: He was 1-for-1 with a walk, an RBI and a run scored.

Jake Binder, Kipp Rollings, Bubby Rossman, and Ian Krol each pitched a shutout inning for the NERDS Herd in relief to keep the game close. Rollings struck out two and Krol struck out three in their respective 1-2-3 innings.

With Sunday night's win, the Slammers ended the 2020 City of Champions Cup in first place with a 21-5 record. The NERDS Herd wrapped up their season in fourth place with a 7-19 record.

The Joliet Slammers play at DuPage Medical Group Field in downtown Joliet, Illinois.  They will play their 10th season in 2020.  Visit the Slammers online at www.jolietslammers.com or call the office at 815-722-2287 for more information.