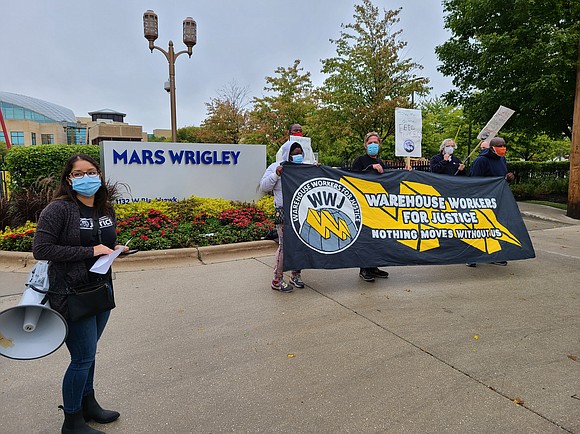 Fed up with poor treatment from management and unsafe working conditions during the ongoing Coronavirus pandemic, current and former workers of the Joliet-based Mars Warehouse and its 3rd Party Logistics companies, XPO and DHL Logistics, held a protest rally and press conference outside the Mars Wrigley building in Chicago Tuesday.

In July the Mars Workers for Justice committee delivered a petition signed by nearly 100 workers to the candy giant and its aforementioned 3rd Party Logistics companies demanding hazard and quarantine pay as well as greater safety measures for the duration of the COVID-19 crisis. Since the petition was delivered by workers, at least three have been fired under suspicious circumstances and now workers will be filing an unfair labor practice complaint against Mars’ contractors.

Standing out in the wind and rain Tuesday, workers demanded Mars and it’s contractors increase safety and end retaliation against workers who demanded increased safety precautions at the warehouse.

Ryan Johnson, a forklift driver, said he was considered “public enemy No. 1” for brining the petition to management on behalf of the workers. “I’m not afraid to ask important questions,” Johnson said. “We are all a team and we’re all in this together.”

Johnson said Mars is more concerned about profits than they are people. “It is our right to organize for better working conditions,” he said.

Ronald Jackson, said management told him he was being fired for causing a disturbance. “How can I cause a disturbance by opening up boxes?”

Demonica Moore had worked as a temporary worker at the warehouse since 2017 and was recently fired. “I went from only having one write up to being fired and placed on the Do Not Return list. A Do Not Return list means you are fired and you cannot work with that staffing agency anymore,” she said. “It does not make sense to me. The only explanation I have left is that I signed a petition for better pay during COVID-19 back in July and this was retaliation against me. But I know it is my right to ask for better pay and better protections at my work.”

Sandy Moreno, lead organizer at Warehouse Workers for Justice, said in no way should there be retaliation against workers who are speaking out for greater workplace safety.”Mars and their contractors need to end retaliation and should work to meet workers' demands,” Moreno said.

Carl Rosen, region president for United Electrical Workers, agreed. “We’re out here standing in solidarity because no employer including Mars should be allowed to retaliate against workers simply for calling attention to the basic safety needs that they have in the face of this pandemic,” Rosen said. “This is an outrage that Mars Wrigley feels they can get away with this.” Mars, he added, is “hiding behind layers of subcontractors.”

Mark Valentine, another former worker, said the Mars warehouse in Joliet is “totally unsafe. It’s about time that Mars be held accountable for their actions.”

Valentine then led the group in a chant:

Located inside Centerpoint, North America's largest inland port, the 1.4 million square feet warehouse is one of the candy giants most important distribution sites in the country. While the massive distribution center moves products for Mars, it is not owned by the company, but instead run by two 3rd Party Logistics companies, DHL and XPO Logistics, along with at least four staffing agencies operating in the warehouse, which, according to organizers of the protest, are “notorious for poor labor standards.”

These are the demands sent to management from the workers:

“We call on Mars to do the right thing:

Based in Joliet Illinois, Warehouse Workers for Justice is a worker center fighting for stable, living-wage jobs in warehouses and distribution centers. We educate workers about labor rights, teach folks how to enforce their rights, organize in the workplace and community and fight for public and private policies that promote full-time work at decent wages in the warehouse industry.

Attorneys from the Raise the Floor Alliance said they will be filing unfair labor practice charges with the National Labor Relations Board over claims of retaliation against workers who signed a petition for greater COVID-19 safety.