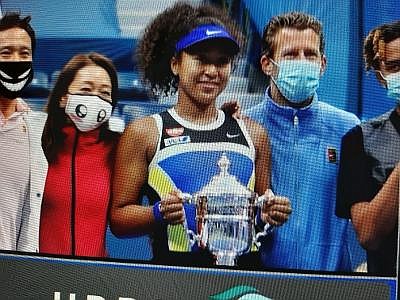 Naomi Osaka won the 2020 US OPEN in a come-from-behind victory over Victoria Azarenko, 1-6, 6-3, 6-3. This is the second US Open title for Osaka, who won a tantrum-scarred match against Serena in 2018. She is truly vindicated. This time, she won it without controversy ( A penalty against Serena gave Osaka the winning edge) and in the name of a Righteous Cause, championing the victims of police violence by wearing the names of victims on her face masks for each of her seven tournament appearances. On Saturday, the day of her finals win, she wore the name of 12 year old Samir Rice, who was gunned down by Cleveland police in 2014. He would have turned 18 this past June 25. Osaka is a winner both on and off the tennis court.