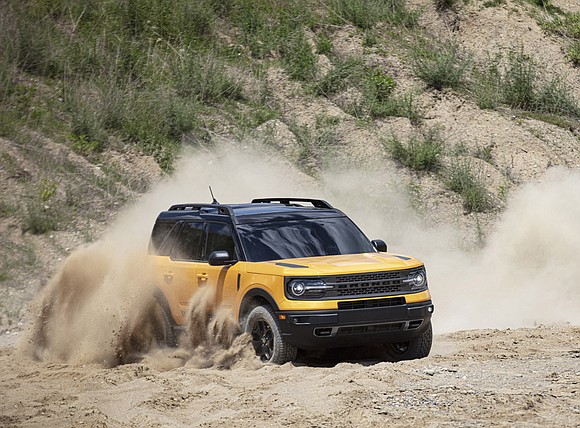 We came to the Holly Oaks ORV park to get a taste of the off-road chops of the new and revised 2021 Ford Bronco.

For the record, ORV stands for off road vehicle-park. This place was about 50 miles northwest of Detroit and on at least the part we saw, there wasn’t a paved road on it.

The Bronco has generated an awful lot of ink since it debuted. The SUV has a storied and infamous history that dates to 1965. Its past is both infamous, with the slow-motion police chase of OJ Simpson following the murder of his wife and her friend in 1994 to James Garner, star of the TV show Maverick racing the Bronco on the Baja Peninsula in the late ‘60s and early 70s.

There was an exhibit here recounting both as well as other parts of its history. But this was where the rubber hit the road, or sand. There are enough trim lines of the Bronco and engine choices to rival the choices given to pickup truck buyers. Thus, will stick what we drove, or in this case rode in as a passenger.

Impressive was our experience.

We went up and down steep inclines angled at 15 degrees to 25 degrees. There was some creepy crawling down these slopes but most of this test drive was at speeds far quicker than any we have witnessed or driven on off road courses of any type.

The first Bronco we were in was the Sport, it is a smaller version of the regular Bronco. We had the Badlands trim package. But we must stipulate that these were pre-production Broncos, thus, the interiors in no way resembled what the inside of a finished product would look like.

Anyway, our Bronco Sport was powered by a 2.0-liter EcoBoost four-cylinder engine that made 245 horsepower and 275 pound-feet of torque for high-speed off-road performance. Ford says it has the most oomph in this class.

Some areas of the course had been wetted down and the driver put the Sport through its paces, speeding and sliding along the way. We went up at angles so high that we were looking at the sky and could not see the road or path in front of us until the hood came down and we were back on four wheels. But that didn’t last long. It was up and down around sharp curves and up again.

The new Bronco rides on a fully boxed, high-strength steel frame that will be shared with and adapted for the next-generation Ford Ranger. It has an independent front suspension with twin alloy A-arms and coil-over springs, while the rear is a solid axle with five links and coil-overs. So said Ford in a blizzard of press materials. But nothing beats on road or in this case off road driving or riding.