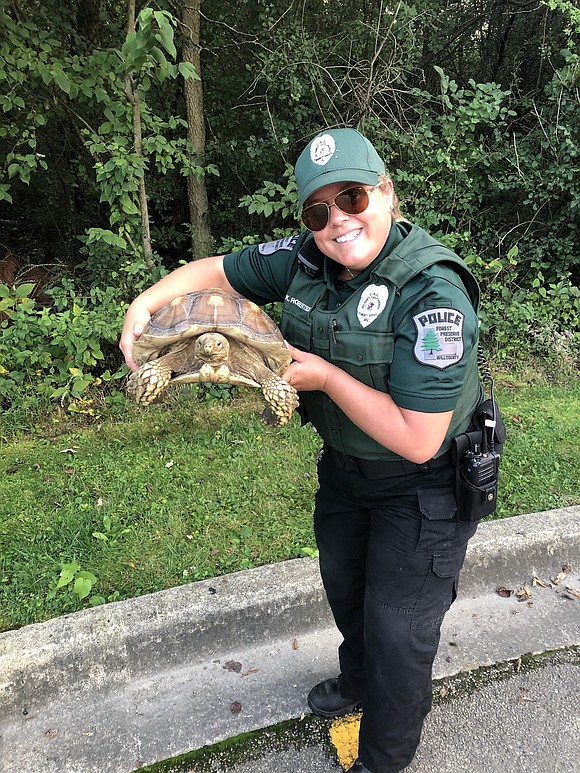 A pet tortoise that was lost in Hammel Woods was successfully reunited with its Shorewood family after a Forest Preserve District of Will County police officer helped solve the missing reptile case.

The incident highlights why people shouldn't dump creatures of any kind in the forest preserves. Doing so is not only unlawful and violators will be ticketed, but it is bad for the animals and the environment.

The tortoise was found munching on some grass at Hammel Woods – Route 59 Access in Shorewood at around 6 p.m. on Sept. 13. When the tortoise was discovered and reported to Forest Preserve police, they began looking for the creature’s owners or a sanctuary or wildlife refuge facility that would take the reptile. Tortoises are not native to Illinois.

Kelly Robertson, a Forest Preserve community service officer, posted information about the found creature on her Facebook page. Around the same time, Laura Egan, the owner of the missing tortoise, posted in a Shorewood moms Facebook group about her lost pet. A friend of Robertson’s saw both posts and connected the two women.

Robertson contacted the Egan family and they had pictures to prove that the tortoise found in Hammel Woods was their missing pet, Gamera, an African sulcate tortoise.

“Robertson was working on her day off to get the tortoise back to its owner,” said Forest Preserve police Sgt. Dan Olszewski.

The Egan family had just moved to Shorewood and the tortoise was left in the unfenced backyard to graze on grass when the person watching him lost track of the animal. The home is around 4 miles away from Hammel Woods, so it appears that someone found the tortoise in the family’s neighborhood shortly after Gamera disappeared and they released him into Hammel Woods, which is illegal.

“There is just no way that he made it 4 or 5 miles in three hours,” Egan said of Gamera, who weighs around 30-40 pounds.

Animals of any kind should never be released into a preserve and anyone who does so will be ticketed, Olszewski stressed. It is unlawful to put anything into a preserve or take anything out, including plants, creatures, objects etc., according to the Forest Preserve's General Use Ordinance No. 124.

Becky Blankenship, the Forest Preserve’s wildlife biologist, said releasing found or unwanted pets into the wild has numerous negative impacts to the animal itself and to the ecosystem. Many pets are not native to the area and they cannot survive in a new environment, she said. Or the released animal may thrive in the wild as an invasive species that can damage native flora and fauna, she added.

Egan thanked friends and family members who searched for the tortoise and Robertson for “taking charge” of the situation and making the reunification possible.

Robertson said she knew the tortoise was not native to the area and that is why she wanted to solve the case.

“I’m just glad he got back to his rightful owners,” she said.