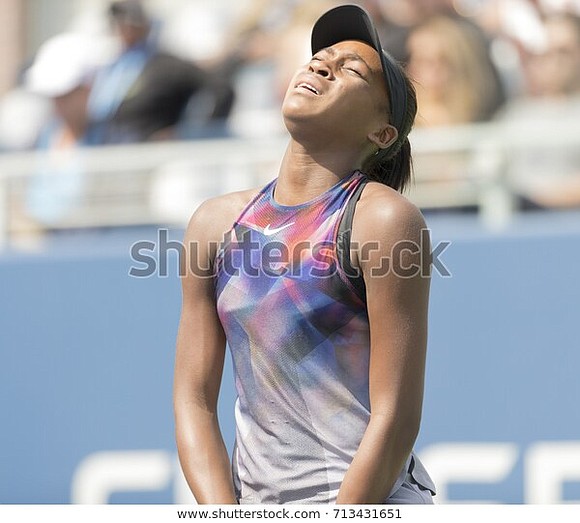 Coco Gauf reacts to an on court loss

The upsets began even before the start of Day Four at the French Open 2020, Roland Garros, Paris.

Serena Williams announced at the wee hours Central Time that she would not be able to play today’s third round match against Bulgarian Tsvetana Pironkova. That closes the door on her tenth bid to pursue a 23-time Grand Slam singles women’s title. That is not to be, at least for 2020. The three-time Roland Garros champions says the Achilles injury she suffered at the U.S. Open in her semifinal loss to Victoria Azarenka three weeks ago came back in the second set of her two set victory over Kristie Ahn in the first round on Monday. “This is an acute injury,” Serena told reporters. “This is not something you want to play with. I need 4-6 months to recover, not another tournament for this year.”

High hopes were then resting on 16 year old Cori “Coco” Gauff who lost to Italian first-timer Martina Trevisan, no. 159 in the world, in a tension filled match. Gauff, ranked no. 51, suffered 19 double faults but managed to grind her way back to a tie in the crucial third set.

Coco seemed to gain her composure at fits and starts, despite her frustration with her second serves. She managed three straight aces and a spectacular backhand shot straight up the line that set Trevisan back on her heels. The advantage proved only momentary. Very quickly the war of nerves with her vexing opponent proved too great and she was driven out. Trevisan has her work cut out for her in the third round. She faces the formidable Greek champion, no. 24 Maria Sakkari in third round action.

That leaves Sloane Stephens as the lone standard bearer in tomorrows third round match against Spain’s Paula Badosa. The match starts off Thursday’s play at Roland Garros, Paris at 3amCT on the Tennis Channel. Visit tennis.com for more on today’s action.