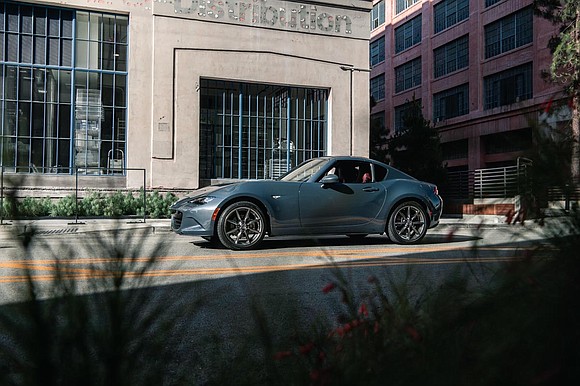 The 2021 Mazda MX-5 is an enthusiast’s throwback. It is a two-seat sports car in a real sense of the words.

We had the MX-5 RF; the RF stood for retractable fastback. In other words, the roof retracted into the tonneau cover in a relatively quick 13 seconds, creating a roadster.

The car was powered by a 2.0-liter four-cylinder engine that made 181 horsepower and 151 pound-feet of torque. It was mated to a six-speed manual transmission.

The MX-5 had contemporary equipment like USB plugs, Bluetooth, satellite radio and heated seats, Apple CarPlay, and Android Auto. Our test vehicle did not have a navigation system; however, one can be installed.

But some of its equipment was rudimentary. The hand brake was not electronic; we had to pull up on the lever to engage the hydraulic emergency brake, which in effect is the parking gear on a manual transmission.

Weight distribution was near perfect, 50-50 between front and rear. The MX-5 RF tipped the scale at slightly less than 2,500 lbs. That is a horsepower to weight ratio of almost 14 pounds for every horsepower, that is not bad.

The MX-5 was a small car. Thus, the passenger cabin was close but not suffocating. Adhering to true sports car tradition the odometer was in the middle of the triad of instruments. The speedometer was on the right and radial dial holding the oil temp, the range, the external temperature gauge, and the fuel gauge was encircled in their housing on the left.

The top was completely automatic; just push a button at the bottom of the dash and it folded away. There was stitching and the material covering the heated Recaro sports seats was suede-like.

Brembo front brakes with red calipers could and did bring the car to a prompt stop. There were side sill extensions, and the roof was black, the body was gray.

Contemporary meant keyless operation. There was also air conditioning. It also had 17-inch dark alloy wheels. It had a lane departure warning system, a rearview camera, and blind spot alert.

The MX-5 was a lot of fun to drive. That is the point, and it is no doubt why the sports car has been around for 30 years. There is nothing practical about it. And most important, it was affordable. Our test vehicle had a sticker $38,660 as tested.