"How the Word is Passed" by Clint Smith

"Chasing Me to My Grave: An Artist's Memoir of the Jim Crow South" by Winfred Rembert, as told to Erin I. Kelly, foreword by Bryan Stevenson 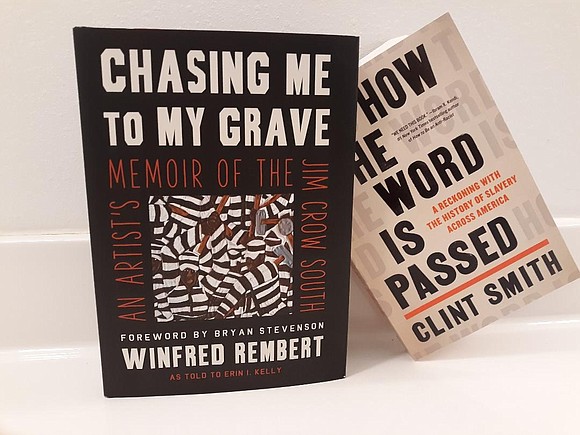 History, they say, repeats itself.

Look back a few hundred years, and you can see corresponding events, world-wide and through time. Parallels are interesting to spot; some people might even take them as a warning, so that atrocities, inhumanities, and just plain wrong things don't happen again. And sometimes, as in these two books, just learning about historical events can be an eye-opening thing...

The history of America cannot be told without slavery in every cranny of the tale. In "How the Word is Passed" by Clint Smith (Little, Brown, $29.00), readers travel with the author to several places around the country where slavery still lays open and waiting for its part to be included.

When the subject of slavery comes up, it's often rarely mentioned that transatlantic slavery was outlawed nearly six decades before the end of the Civil War. Of course, that never stopped the import of human beings, but it did change the way that slaves were acquired. The city of New Orleans had a big hand in slave-owners' acquisition, and when Smith traveled there, he found that the city if working on a reckoning with its past.

That's just one place that Smith visited, in an effort to offer readers a wide-reaching look at how slavery sits within our collective story, in places that history books don't always mention. There's irony in the story of slavery at Monticello, where Thomas Jefferson wrote at length about liberty while he kept slaves. Smith writes of the Whitney Plantation, where visitors can today see what slavery was like two centuries ago. He writes about slavery in our cities, our prisons, and even in death. This trip around the country and through time gives this book a quiet appeal that's especially relevant for today.

Understanding may come faster when the story is told first-person, as it is in "Chasing Me to My Grave: An Artist's Memoir of the Jim Crow South" by Winfred Rembert, as told to Erin I. Kelly (Bloomsbury, $30.00).

He didn't remember exactly why he'd been arrested that first time.

Winfred Rembert was "only eight or nine years old" but it might have been about a fight. That once, the Sheriff made it all into a game but by the time Rembert was a teenager, being arrested for no reason but Black was a common thing.

Filled with a personal story told casually and colorfully-reproduced artwork, you may find this book to be a keepsake. And if you want more books like it, or the Smith book, be sure to ask your favorite bookseller or librarian. They've got ideas for Black history books you'll want to page through, repeatedly.