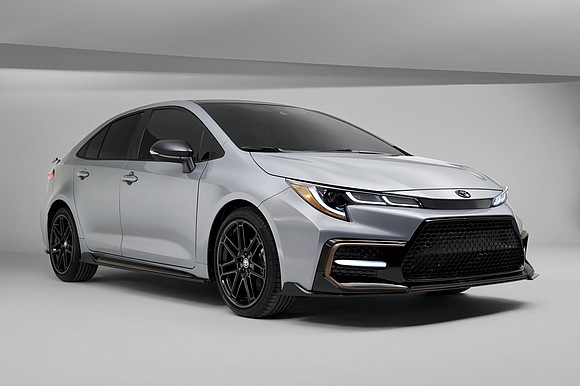 Toyota has been trying to change its staid image into something a tad funky. Thus, it has developed the 2021Corolla Apex SE CVT which was a spunky little sedan.

It was more of an appearance package than a power package. But that was okay, it still had a little kick.

The car was powered by a 2.0-liter four-cylinder engine that made 169 horsepower and 151 pound-feet of torque. It had a continuously variable transmission with paddle shifters.

This transmission was programmed to simulate shifting gears and it did so well. But under had acceleration, this Corolla sort lurched forward when it shifted gears. It had two drive modes: eco and sport.

The Corolla was more of an appearance package and a very nice one. Its body kit included a front spoiler, fog light covers, side moldings and rear diffuser. We particularly liked the black roof which appeared to a panoramic roof, but it was not, and the black rear trunk spoiler. It had LED lights all round, black rocker panels, black heated outside sideview mirrors. It really did look snazzy.

It had a sport-tuned suspension that was rough. In other words, the driver felt every bump. That is what sports cars do. We were a bit confounded since eco was the normal drive mode and it was firm. We didn’t see the need or feel the difference when we selected sport.

The car had a sport-tuned exhaust fitted with a conical-shaped tailpipe tip. The Toyota Corolla Apex can be had with a six-speed manual transmission which we would be our choice.

Still, the CVT was programmed to simulate a 10-speed automatic. It was smooth but most of them are. And it was a lot quicker than it sounded, that too is a characteristic of CVTs.

Our test vehicle did not have a blind spot monitor though it comes with XSE trim. We had the SE.

Inside, there was a floating infotainment screen. But our model did not have a navigation system, or streaming services. But it did have Bluetooth, voice controls, a backup camera and keyless entry and keyless start.

The instruments were analogue with a TFT screen on the left of the speedometer. The climate controls were just beneath the infotainment screen, which were separated by the vents.

We were really surprised that though close, the back seat could accommodate three people. That had much to do with Toyota’s global platform. There was headspace, even when we climbed on the hump to check it out.

We had a prototype so there was no sticker. However, we had a list of equipment for this car. But no doubt it was for a top-of-the-line model. That car cost $26,440. Our test car would no doubt cost less because it didn’t have Android Auto, Apple CarPlay or Amazon Alexa and no navigation system.

And the most important thing to remember is that the 2021 Toyota Corolla Apex is a limited run vehicle. Toyota plans to produce just 6,000 per year.