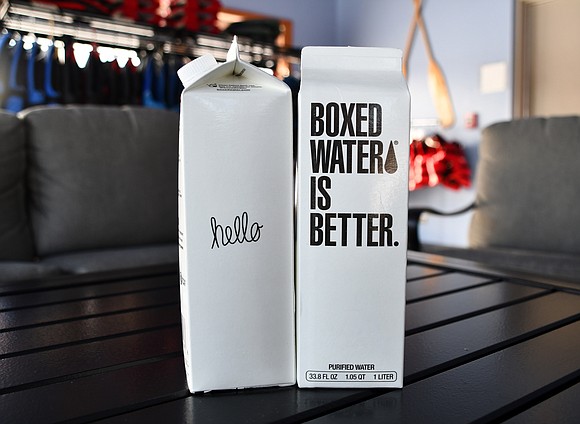 Anglers and hikers who get parched at Monee Reservoir this year will have a new option to quench their thirst: boxed water.

Boxes of water made mostly from paper will replace single-use plastic water bottles at the Forest Preserve District of Will County’s Monee Reservoir Visitor Center concessions stand when the building reopens on Tuesday, March 2, after a winter hiatus.

The water containers are made by Boxed Water is Better, a Holland, Michigan-based company that touts the many benefits to switching from plastic water bottles to boxed water, including keeping plastic out of oceans and landfills.

The boxes, which are refillable and reusable, are made from 100 percent recyclable materials and are free of BPA, a toxin found in some plastics. Also, the production of boxed water has a lower carbon footprint, uses fewer fossil fuels and has a lower impact on the ozone layer than plastic or aluminum water containers, according to the company.

Grabbing a box of water instead of a bottle might be a new experience for some customers, said Jason Stevenson, concessions manager at Monee Reservoir. But Stevenson said he believes they will easily adapt.

Lynn Kurczewski, the Forest Preserve’s director of visitor services, said she is encouraging her staff to search for additional green items that can be sold or installed.

“I want them to research whether items are sustainable, made from 100 percent recycled materials, are plastic-free, or have reduced/recyclable packaging,” she said. “One of the District’s six core values is environmental awareness. I think that the Forest Preserve must be a leader and set an example, both internally and externally, by choosing recyclable, sustainable, plastic-free items whenever possible.”

For more information on the Forest Preserve District of Will County, visitReconnectWithNature.org.