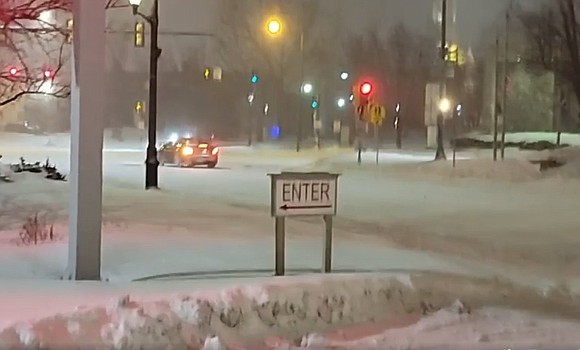 The snow came down hard at the Six-Corners intersection in Joliet on Monday night. (Photo provided by Robert Hernandez)

“I believe we’re doing a great job here, but we’re running out of places to put the snow so you’re going to have to bear with us,” Joliet City Manager James Capparelli said during Tuesday’s City Council meeting. “We’re not going to be able to get things just quite like you like it or how it’s been in the past as the snow continues to build up and we can expect more over the weekend without let up.”

Adding to the problem, he said, is the city is running low on salt, with only 1,200 tons left. Another 2,800 have been ordered, but priority for all available salt goes to the Illinois Department of Transportatio, Capparelli added.

Gov. JB Pritzker issued a disaster proclamation for all 102 counties in response to the dangerous winter storm that has blanketed the state with life threatening wind chills, power outages and accumulating snow. The extreme arctic temperatures affecting more than ten states adds additional stress on utility providers across the nation.

As of 10:30 a.m. on Tuesday, approximately 7,000 Illinois households were without power, and that number is expected to fluctuate as the strain of arctic temperatures and extreme weather continues. To alleviate stress on the nation’s grid, all Illinois residents are encouraged to take appropriate measures to safely conserve energy.

“I have directed my administration to use all resources at our disposal to keep our communities safe amid dangerous and ongoing winter weather,” Pritzker said. “We are in communication with local governments to ensure they have the support they need in disaster response and recovery operations. We are also working with our federal partners to pursue federal assistance to help communities recover and to do what we can to protect ratepayers from soaring utility bills. I urge all Illinoisans to take this extreme weather seriously, avoid all unnecessary travel and check in on your neighbors.”

Capparelli said with Pritzker issuing the disaster proclamation he is hopeful Joliet will “be able to get some funding from the state to cover the added expenses of snow removal and possibly some of the water main breaks that have taken place. We’re going to try to recoup some of our expenses,” he said.

Officials from other communities in the area are also going to see if they can recoup some of the costs for snow removal. Lockport City Administrator Ben Benson said city crews have logged 1,500 hours of overtime for snow removal and he plans to seek funding when it becomes available.

“The state has not given directions or paperwork on how to file for the funding yet, but it would be good,” Benson said.

Extreme weather has resulted in frozen wells in key natural gas producing states, including Texas, Oklahoma and Kansas. The sub-zero temperatures are resulting in increased demand and decreased supply, causing natural gas prices to spike. Utility companies across the nation are reporting soaring wholesale costs, and without federal intervention, those increased prices could result in higher utility bills for local residents in the coming weeks.

“Proper home heating is a critical issue during the winter months, and over time has proven deadly for many families,” Illinois Emergency Management Agency Director Alicia Tate-Nadeau. “If using an alternative heating source during this extreme weather, take a moment to ensure that your carbon monoxide detector is working properly. The proper safety precautions can save lives during extreme weather.”

WINTERIZE YOUR HOME: Winterize your home to extend your fuel supply

• Caulk and weatherize doors and windows

• Cover cracks around doors with rugs, newspapers, towels or other such material

WHEN AT HOME: Safely conserve energy

• Stay indoors in a heated room as much as possible

• If you have no heat, close doors and vents in unused rooms and shut the doors

• Lower the temperature on your home water heater a few degrees

• Reverse your ceiling fan to turn clockwise, producing an updraft that will move the warm air that collects near your ceiling down to the rest of the room

Over the course of the next few days, Pritzker encourages all Illinoisans to check on their neighbors, especially elderly neighbors who may need assistance.

Statistics show 46 percent of individuals expect to rely on the people in their neighborhood for assistance within the first 72 hours after an emergency or disaster. If you are unable to get in touch with your neighbor, or if you are worried, please contact your local law enforcement for a welfare check.

More tips for staying safe at home and on the road are available in a Winter Weather Preparedness Guide developed by IEMA and the National Weather Service. This guide is available, in digital form, on the Ready Illinois website at www.Ready.Illinois.gov.

Joliet Mayor Bob O’Dekirk said it has been a difficult winter. “It’s been a very trying time, but I think they’ve done very well,” O’Dekirk said, adding that he received some complaints about cul-de-sacs not being plowed on the city’s west side. Some of those, according to the mayor, are the responsibility of the homeowner’s associations. O’Dekirk said he wants to try to work with homeowners in some of those areas and added that he also would like to see a volunteer snow shoveling program expanded for senior citizens and those with disabilities.