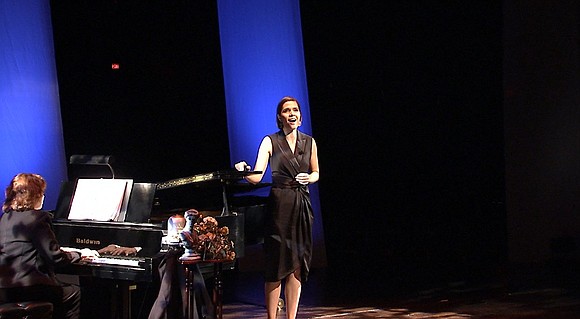 The Center for Performing Arts’ 25th Anniversary Season looks different from what Executive Director Lana Rogachevskaya, her staff, and advisory board originally envisioned. “Instead of welcoming thousands of visitors to our beautiful, state-of-the-art, 1,171-seat venue, we are welcoming visitors to our YouTube page.” While the platform and experience is different, the Center remains committed to its vision of bringing together diverse artists and audiences to create experiences and memories that activate compassion and transform the world.

Originally, the 25th Anniversary Season was to include two Opera Up Close productions directed and curated by Lyric Opera tenor and the Center’s co-chair John Concepcion. “We had just met in March, prior to the shutdown, to discuss opera programming for the 2020-21 25th Anniversary Season,” says Concepcion. “For years, our longest-serving board member and Opera Up Close champion Inge Marra has been asking us to showcase Kurt Weill; the concept of Opera Cabaret fit perfectly.”

Originally envisioned as an intimate, on-stage experience, evoking the aesthetics of 1920s and 1930s Weimar Germany (think Kander and Ebb’s musical Cabaret), Opera Cabaret is now slated to stream on the Center’s YouTube channel, premiering on Sunday, January 17, at 4 p.m. and streaming on demand through February 14, 2021.

“This production would not have been possible without support and collaboration from GSU’s Digital Media, Learning and Design Department (DLMD),” says Rogachevskaya. “We are incredibly fortunate to have an award-winning production team and a state-of the art production facility on campus. In addition to producing weekly news shows, and real-world sport broadcasting, our students could now collaborate with faculty, staff and artists to produce cultural content to be streamed directly from our venue.”

Opera Cabaret was filmed on the Center’s stage to an empty house in early October in strict accordance with health and safety guidelines from the CDC and State of Illinois. DLMD’s Mark Kundla is serving as the director for Opera Cabaret. While Concepcion is responsible for the vocal directions and performances, Kundla worked with his team of students and the Center’s technical crew on lighting for film and framing the shots.

Cultural Marketing Director Jane Cox says, “While we all miss live theatre, it’s been a privilege to work with DLMD and to explore a new medium between live theatre and film. Working with Mark and his team has been incredible. He worked with our team in September to produce our Season Launch which was essentially a 95-minute feature film completed in nine days.”

What can audiences expect if they turn in for Opera Cabaret? Staying true to the vision of Opera Up Close, audiences will be introduced to four young Lyric Opera singers performing selections from traditional operas such as Turandot and The Tales of Hoffmann, to more obscure works of Kurt Weill and Black composers. And of course, John Concepcion will serve as the program’s knowledgeable host, providing background and context for the selections.

“This is one of the most diverse Opera Up Close productions to date,” raves Cox. “It has something for everyone, from more traditional arias from Faust, to songs from contemporary musicals such as Hamilton, and the work of Kurt Weill. I always associated Weill with The Threepenny Opera, and while that’s an impressive work, there is so much more to his repertoire. One of my favorite selections from Opera Cabaret is the lively song, “I’m a Stranger Here Myself” from One Touch of Venus. The lyrics are by humorist Ogden Nash, and the performance by soprano Kelsea Webb is intelligent, sexy, and witty.”

Following the Center’s first segment in Beyond Conversation: The Intersection of Race and Opera, which explored the racial inequity in professional opera, Concepcion says, “There is a wealth of great vocal literature by Black composers, about which, until recently, I was uneducated. Hearing for the first time the songs of Florence Price, Thomas Kerr, Undine Smith, John W Work, and Leslie Adams was a revelation! And I know the audience will feel similarly after they hear these selections in Opera Cabaret.”

Opera Cabaret will stream on the Center’s YouTube Channel (https://www.youtube.com/user/GSUCenter) starting January 17 at 4 p.m. through February 14 at midnight. Tickets are available on a pay-what-you-can-scale from $5 to $25 per household.

To purchase tickets and access the production, visit www.govst.edu/OperaCabaret .