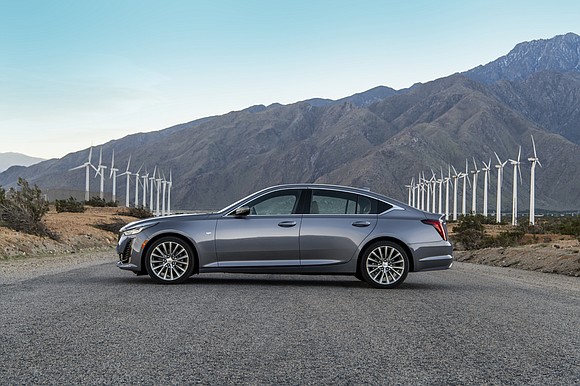 At first glance, Cadillac’s CT5 looks just like the brand’s CT4. But on close inspection, it has a different front fascia, grille and it is a little bit bigger.

It had a 3.0 twin scroll turbocharged direct injection V6 engine that made 335 horsepower and 400 pound-feet of torque. It was mated to a 10-speed automatic transmission and it had paddle shifters.

The engine had fuel management, which means that when cruising it would shut down three of its cylinders. And there was stop start for better fuel management. There were also four drive modes: sport, touring, snow/ice and my mode.

This powertrain got 18 mpg in the city, 25 mpg on the highway and 21 mpg combined. It was smooth, power was available from just about any speed and it had a sound calibration system that gave it some grunt under hard acceleration.

The CT5 had an analogue instrument layout with a large TFT screen between the odometer and the speedometer. Cadillac has rid its sedans of the pushbutton controls for the audio system and hard angles. The controls on the CT5 were softer, there were a couple of knobs to tune the audio system and to change stations, and the controls were redundant.

We appreciated the remote start feature, especially since the mornings here had turned brisk. We also liked that when we turned the Cadillac CT5 off, the controls did not revert to default. In other words, if we had the heated steering wheel on, it was still on when we restarted the car.

It is the little things that are not noticed but critical to a positive driving experience that keeps customers satisfied and coming back. For instance, Cadillac has solved the polarized sunglass issue, which apparently only we are aware of. The point is we could see the head up display while wearing our polarized sunglasses. The lettering went from white to blue, but we could see it.

This platform had more legroom in the back seat, but the tunnel was pronounced on our all-wheel-drive model. We tried sitting on the hump and the elevation erased our headspace. The CT5 is a four-passenger sedan.

There was a floating infotainment touch screen. The USB jacks could accommodate attachments for iPhones and Android smartphones. If The car also had a 12V plug, and it was a Wi-Fi hotspot.

We really did like the manual seat extenders in the front. Of course, it was keyless entry and keyless start. The 2020 CT5 had an interior covered with faux carbon fiber around the gear shift and on the door panels.

We had the premium luxury trim line. That gave us almost $18,000 worth of options. We will not list them all here. But they included: power lumbar massage, the ultra-view sunroof, extensive ambient lighting, leather seats, manual shift control, premium sound system, all-wheel-drive, and driver assistance.

There were the usual creature comforts like voice controls, satellite radio, Bluetooth for hands free phone operation and streaming, automatic headlights and high beams, lane keep assist and the head up display.

The base price of the 2020 Cadillac CT5 was $40,695. Our test vehicle had four option packages that included the $3,500 the V6 turbo with automatic stop start. There was plenty equipment that could be added or dropped to fit consumers’ pocketbooks. Add on a $995 freight charge and the total for our CT5 as tested was $59,395.