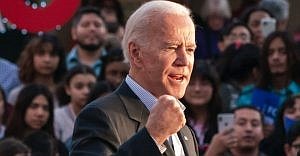 President-elect Joe Biden pulled no punches on Thursday when he spoke about the violent mob that rioted, looted, and ransacked the U.S. Capitol a day earlier.

The actions from the mob of President Donald Trump supporters contributed to death, destruction, and global embarrassment for the United States.

The Delaware Democrat spoke of his granddaughter sending him a photo of armed security guards and law enforcement standing at the Lincoln Memorial during a Black Lives Matter protest last year.

“She said, ‘Pop, this isn’t fair. No one can tell me if it had been a group of Black Lives Matter protesting yesterday, they would not have been treated very, very different than the mob of thugs that stormed the Capitol,'” Biden relayed.

“We all know that it is true. And it is unacceptable. Totally unacceptable,” Biden remarked.

Black Lives Matter officials had earlier made the same observation.

Sanders and others took note of how some of the Capitol officers opened gates and let the mob into the immediate area outside the building’s doors.

Some officers were seen taking selfies with protestors.

“I am enraged by the light treatment that these terrorists are getting,” Sanders demanded.

“They have guns. They have attacked the police. They have attacked innocent people who are just in the area, and yet they have not been beaten and teargassed and had flash-bangs thrown at them the way we had all summer long. We didn’t have any weapons. All we had were our voices saying, ‘Black lives matter.'”

“I will say it because I don’t think a lot of people want to,” Rivers announced. “Can you imagine today, if those were all Black people storming the Capitol, and what would have happened? That, to me, is a picture that is worth a thousand words for all of us to see.”

Biden also implored media members to not label the mob at the U.S. Capitol as “protestors.”

“They weren’t protesters. Don’t dare call them protesters. They were a riotous mob, insurrectionists, domestic terrorists,” the President-Elect stated.