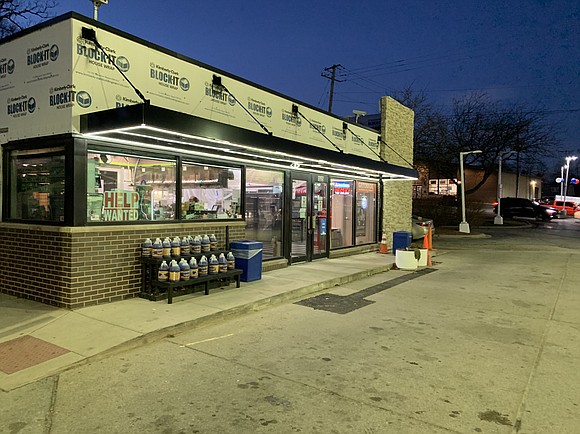 Terry Lambert is making some major renovations to his family business at 1529 N. Broadway St., in Joliet.

A long-time business owner in Joliet is a step closer to getting the liquor and gaming licenses that had been rejected in July of last year by the city council.

Terry Lambert scored a victory with the Illinois Liquor Commission on Monday for his request for a liquor license for his family business, Lambert Mobil and Convenience Store at 1529 N. Broadway St., when the commission overturned the Joliet City Council’s denial of the license.

The liquor license is the first step Lambert needs to take to so he can pursue a gaming license and install video slot machines in his convenience store.

While Lambert’s request was denied, the City Council voted 5-3 in favor of granting a license for Thorntons at the corner of Collins and Jackson Streets on Joliet’s east side. Thorntons paid an estimated $300,000 for the historic Casseday Home to be moved a few blocks away from the site to make way for the business in exchange for the council approving the licensing necessary to allow it to serve alcohol on the premises and offer video gaming. Five city council members who voted in favor of the deal, which countered a city ordinance prohibiting granting liquor licenses to gas stations, included Pat Mudron, Sherry Reardon, Jan Quillman, the Don “Duck” Dickinson (who has since resigned from the council) and Bettye Gavin.

Lambert balked and his attorney, Jim Murphy, appealed the city council’s denial of his liquor license to the Illinois Liquor Commission. The commission ruled in Lambert’s favor. “They effectively repealed the ordinance against granting liquor licenses to gas stations,” Murphy said.

The city now has 28 days from this past Monday to file a rehearing before the Illinois Liquor Commission, according to Murphy.

It’s unclear exactly what Joliet’s next move will be. City Manager Jim Capparelli said he, Assistant Corporation Counsel Chris Regis and other members of the city’s Legal Department are “reviewing all options at this point.”

Mayor Bob O’Dekirk said the City Council’s approval of the permits for Thorntons opened the door for the Illinois Liquor Commission’s vote to overturn Joliet’s decision to deny the Lambert request.

“The 5-3 vote on Thorntons did create this precedence, which is something I warned of prior to the vote,” O’Dekirk said. “On both Thorntons and Lambert my office (the liquor commission) recommended against the proposals.”

O’Dekirk noted that former interim City Manager Steve Jones had listed one of his reasons for firing former Corporation Counsel Marty Shanahan was because Shanahan did not support Jones in pushing for the license.

“Like me, Marty also warned against setting this precedent,” O’Dekirk recalled. “Unfortunately, the majority of the council ignored Marty and I and listened to Steve Jones, who assured the council and the public that the Thornton approval would not set a precedent.”

Lambert said he could not understand why the council would approve a request to an “out-of-town” business like Thorntons and then deny someone who has had a service station in in Joliet since the late 1950s.

“There was no loyalty to a business establishment with longtime ties to the community,” Lambert said. “They say ‘you can’t fight City Hall.’ Well, it turns out you can. I feel it’s the fair thing to do. If you’re going to allow it for one, others should have the same opportunity.”

Lambert is doing renovations to his business and plans to offer specialty coffee and even have an area to display all the historic photos from the business dating back to 1957. “It’s going to be really neat,” he said.