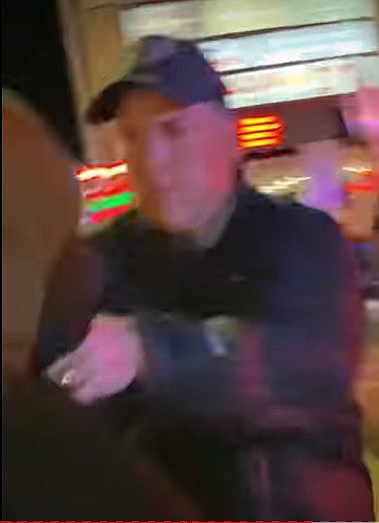 This is a photo taken from a video of Joliet Mayor Bob O'Dekirk scuffling with a man while trying to subdue him following a protest on Jefferson Street on May 31, 2020.

The Illinois State Police has completed its investigation into the scuffle between Joliet Mayor Bob O’Dekirk and two brothers in late May of last year.

O’Dekirk said he found out a couple of weeks ago that he had been cleared of any wrongdoing on the night of May 31, 2020.

“I wasn’t surprised,” O’Dekirk said. “I never felt I did anything wrong. I’m glad it’s over with.”

Victor Williams Jr., 23, of Lockport, and Jamal Smith, 28, of Crest Hill, were charged with aggravated assault and mob action after O’Dekirk got into an altercation with the two brothers following a protest along Jefferson Street. A video surfaced the day after the altercation showing the mayor pushing Williams toward a police car after which police officers and Smith got involved in the scuffle.

An investigation into the incident was then conducted by the Illinois State Police. The charges against the two brothers were later dropped in court and the Will County State’s Attorney never filed any charges in the case.

Supporters of Smith and Williams protested outside the Joliet courthouse on the day the two brothers went before a judge. One held a sign calling for O’Dekirk to resign while others held up Black Lives Matter signs.

Lawrence O’Toole, attorney for the two brothers, said a video clearly showed his clients being beaten by police and O’Dekirk and the mayor had no right being out there that night “personating a police officer” and directing civilians where they can and cannot go.

Williams has said he was trying to walk to his car when the mayor stopped him. The mayor is heard yelling “hey” and then grabbed Williams by the collar and walked him toward a police officer. It was then that Willams’ brother Smith tried to stop the mayor and other police officers then got involved, and Williams was taken to the ground.

After the incident, the two brothers denied knowing it was the mayor who they scuffled with. O’Dekirk said the protest turned violent, and people began throwing bottles of water at police and breaking windows of area businesses on the night in question.

On Tuesday, O’Dekirk said he never worried about the outcome of the Illinois State Police investigation. “If I had done something wrong and I had lied about it I would have been worried about it,” he said. “I was out there to be an eyewitness and trying to stop the violence.”

The mayor said he has never spoken to the two brothers after the incident. O’Toole later filed a civil suit on behalf of the brothers against O’Dekirk.

One of the things O’Dekirk said always bothered him about the incident is the two brothers being referred to as “kids.”

“These were not kids – they were grown men in their 20s and they were participating in a riot,” O’Dekirk said.