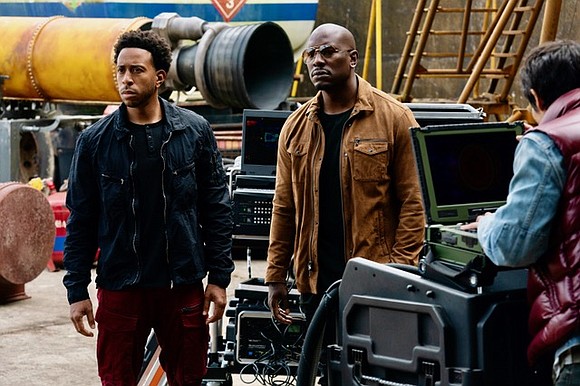 Twenty years after The Fast and the Furious’ debut in 2001, the crew is still driving fast and acting furious. Back in the day, these streetwise, emotionally connected twentysomethings broke the mold for on-screen multicultural friendships, long before inclusion became a thing. Have they gone off the road? Fans will make that decision.

There was something so refreshing about the first F&F. Vin Diesel as Dominic Toretto, Paul Walker as Brian O’Connor, Michelle Rodriguez as Letty, Jordana Brewster as Mia, Dom’s sister and Ja Rule as Edwin all had chemistry. Through the years the franchise has added and subtracted members as the cutting-edge group of rebels burned up the streets around the world. At some point, their death-defying driving added over-the-top, fantasy trickery. What was once grassroots reality shifted to implausible, but their audiences increased nonetheless.

Dom is living under the radar with his wife Letty and young son Brian. Their peaceful existence is interrupted when Roman (Tyrese Gibson), Ramsey (Nathalie Emmanuel) and Tej (Ludacris) drive up to their door with a problem. Rogue agents have kidnapped their nemesis Cipher (Charlize Theron) and are trying to retrieve a device dubbed Aries, which can hack into weapons systems worldwide. The tip-off was a cryptic missive from Mr. Nobody (Kurt Russell) whose plane went down in a Central American rain forest. The crew assembles and heads to the crash site.

Screenwriter Daniel Casey and writer/director Justin Lin use this premise as a step off for giving the drivers reasons to rev their engines around the world and beyond. Los Angeles, Latin America, London, Caspian Sea, Tokyo, Cologne, Edinburgh and outer space! The plotting relies on the usual bag of tricks, car stunts, martial arts fights (the one in Japan involving Letty and Mia is the best), daring escapes, gun battles, evil deeds and the ultimate good guys versus villains battle that builds up to a grand finale where a Pontiac Fiero flies above the ozone. The latter feat is so ridiculous, suspending disbelief is not the point. Just junk plausibility altogether.

To say the cast is overflowing with cameos (Cardi B is a savior and Helen Mirren a delight) and supporting roles (Bow Wow, Lucas Black, Michael Rooker…) is an understatement. Added to the mix is a 1989 flashback where a younger Dom (Vinnie Bennett) and his brother Jackob (Finn Cole, Peaky Blinders) have a big blowup over their father’s (JB Pardo, TV’s Mayans M.C.) death. Now, the adult, Jakob (John Cena) is in cahoots with the bad guys who are led by Otto (Thue Ersted Rasmussen). That’s a whole lot of folks to follow. It’s confusing at its worse. But very appealing to international audiences, which could help at the box office and on streaming and cable services.

Besides the GM car space jaunt, some improbable moments stick out: Dom pilots a sleek, low-riding, rear-wheel-drive 1968 Dodge Charger on and off dirt roads and through and over Central America jungle-like terrain. A Charger is a street vehicle, nothing more. It isn’t a Jeep or a military truck. When the crew arrives at the airplane crash site, there are small fires still burning around the fuselage. If it took at least a day to get there, why would there still be flames? There is also a point when Dom tries to help others escape, by pulling on chains that make a cement-looking ceiling fall. The dude is muscular. He’ isn’t Superman, right?

The cast is now largely in its 40s with Diesel in his fifties. They’re too young for social security, too old to be Gen Z. It will be curious to see how much longer the gang holds itself together, though undoubtedly box-office profits potential for this billion-dollar juggernaut is a tempting reason for all to covet that paycheck. Gibson still provides comic relief; Theron is extremely venomous, and Cena is a good addition. The rest are as good as they’ve always been, but not better.

Director Justin Lin made waves with his gritty 2002 urban Asian crime drama Better Luck Tomorrow. He kept that close-to-the-ground style when he directed The Fast and the Furious Tokyo Drift in 2006, which was one of the most unique in the nine-chapter series. If Lin and Diesel, both co-producers, look back to their roots and try to re-capture that simpler magic this franchise could last forever. Keep the tech team: cinematographer Stephen F. Windon, composer Brian Tyler, production design Jan Roelfs. editors Greg D’Auria, Dylan Highsmith, Kelly Matsumoto and costume designer Sanja Milkovic Hays. Keep the car chases and hard-driving music playlist. Bring the outlandishness back to down to earth.

F9… is more of the same but overwrought, overdone and overcooked. Some may wish the franchise went back to the basics. And they’d be right.