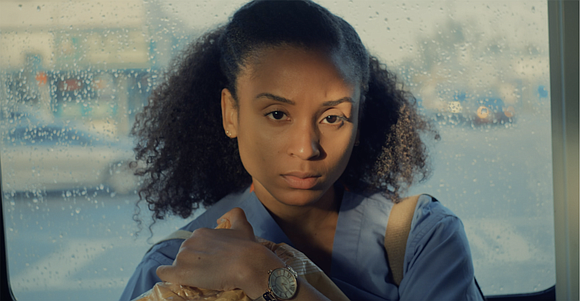 Edson Jean’s “Ludi” is an intimate portrait that explores the experience of a young Haitian immigrant, Ludi Alcidor, recently arrived in Miami’s cultural potpourri of Little Haiti. Working thankless long hours for little pay as a caretaker in a nursing home, the film is a love letter to those nameless, faceless front line workers that are only now the subject of closer scrutiny in this time of the pandemic.

Written, directed and produced by Jean, Ludi is largely based on the experiences of the director’s own mother as a Haitian immigrant.

Besides being honored as the festivals Opening Night film, “Ludi” was also the Official Selection at SXSW 2021 Film Festival.

Ludi is the first film to emerge from the festival’s Oolite Arts Cinematic Arts Residency. The program fast forwards the careers of Miami filmmakers by giving them $50,000 which allows them to conceptualize and create a micro-budget feature film and take that first step into their film careers.

The film is rich and layered, much like the culture it represents. The dialogue is a heady mix of English, Haitian Creole patois and Spanish. That, and the sound track of Original Music by Darnell Monestime, gives the viewer a real glimpse of modern day Miami and its multi-cultural, multi-lingual pastiche.

The intimate and revealing camera work of cinematographer Juan Camilo Barrica, the production design of Lauren Caulfeld and Jonathan Cuartas’ beautifully paced editing, give the film a style that grounds its sense of time and place.

Monestime’s sound track, at times dark and haunting, at others bright and exuberant, is evocative.

Ludi’s sense of loneliness and estrangement is palpable throughout the film, as is her sense of futility. “ The way is long, and the road is hard,” she confesses in one of her cassette taped messages to her cousin in Haiti. (We’ve left the days of the cassette long ago, cousin. Why don’t you use the money I sent to put minutes on your phone? That way we can communicate with ease.” Ludi tells her far-away cousin Geline).

While caring for a particularly difficult patient, she has an emotional breakdown. “I work and I work, and I stress and I stress, and nothing is happening. God, I’m suffocating!”

Earlier in the film, in a quiet moment, Ludi reflects on a recurring dream, which is quite indicative of her state of mind. Over a dreamy series of camera shots and the strains of a limpid solo guitar, she soliloquys “For a week now, I’ve been having the same dream. I’m standing in the middle of a huge field. Wherever I look. I can’t see anything, just grass. I run to see if I can spot anything familiar. I’m running and running. But I end up where I started. When I see this, I run faster and longer. But every time I stop, it’s like I never lifted a foot.”

She pours out her soul to her little cousin Fafa in another of her taped messages to Haiti. “I’m still chasing a better life. But in this country, it looks like I’ll die before I reach it.”

Lamenting her lot in life, Ludi reflects on the demands placed upon her by her ever-needy family. “They send you here for a better life. But in the end, you spend your entire life trying to pay them back!”

Early on, we get a glimpse of what Ludi’s life is like in Miami’s Little Haiti, as both a woman and an immigrant. An encounter with Brother Julien, the jitney driver who takes her to work everyday, tells you everything you need to know. “You need a man. You need a man, so you can have babies,” he admonishes her. “”You too American now. You think that work is better. You need Jesus!”

Her best friend and co-worker Marie, is no help either. When she offers to pray with Ludi during a rare break at work, Mary starts invoking the Lord’s name in helping Ludi to find a mate and have a child, echoing the backwards sentiments of Brother Julien. ‘Ahmen! Ludi shouts. Abruptly cutting her friend off.

Mary backs off initially, but quickly retorts:”A plan without Jesus is not a plan. Your shoulders are strong, but not unbreakable.” Boom!

The main dramatic construct of the film involves Ludi’s efforts to find extra shifts at the nursing home in order to send money home to her demanding family in Haiti. Her little cousin is soon graduating from elementary school and she needs a new dress. The situation at work is compounded by the fact she’s not allowed to take outside private work that might prove more lucrative and solve her money problems. A non-too-subtle shot of a TV ad for one of those local payday loan places called Pronto Pesos, emphasizes the point.

Enter her conniving and manipulative co-worker, frenenemy and landlord Blanca (Madelin Marchant) who offers a solution—take on the verboten private patient off premise after hours. Initially, Ludi refuses. “It’s against agency policy. I can’t do any outside work. Lying in secret is still lying!” Blanca reminds her that as her landlord, she’s been lenient when Ludi was late on the rent. ‘Me gusta trava!’ Ludi shouts in Haitian Creole. Thus putting the exclamation point on her refusal to comply.

Negotiating with her boss, Coretta, or ‘Retta’ to the staff (played by the alternately imperious and sympathetic Patrice Degraff Arenas), proves fruitless. “You clocked 60 hours last cycle. You’re here more than the patients. Go home!” Retta admonishes. She then throws Ludi at the mercy of the nursing home’s resident wolf, Evans, an egotistical and sexually harassing Success St. Fleur Jr.), to beg to cover his extra overnight shifts. After putting up with one too many of his unwanted sexual overtures and veiled threats, she decides to give in to Blanca’s illicit scheme and calls her to accept the outside gig.

That’s when she encounters the recalcitrant George, an irascible old codger of Jewish immigrant stock whose idea of a good time is hurling his fesces at the rotating cast of caretakers he routinely runs away. Their quixotic relationship quickly becomes the heart and soul of the film. George’s persistent antagonism and the challenges he presents force Ludi to confront her circumstance and to, ultimately, reclaim her self-esteem.

Jean’s writing and deft use of camera angles in the claustrophobic setting of George’s cluttered apartment are sheer genius and offer some of the films most engaging and endearing moments.

I won’t share much more about this film, because I want you to order it and watch it.

“Ludi” makes a really important social statement and shines a light on the quiet, nameless and faceless people we see everyday, yet assign little importance to.

Edson Jean takes us inside Ludi’s world and gives us an intimate view of her life and her uphill struggles. It is a quiet, contemplative film, yet it speaks thunderously. In this time, when front line caretakers bear the brunt of the pandemic, Edson Jean gives people like Ludi a face and a voice, and, more importantly, a heart. Visit miamifilmfestival.com for information on this and other festival films through March 14.