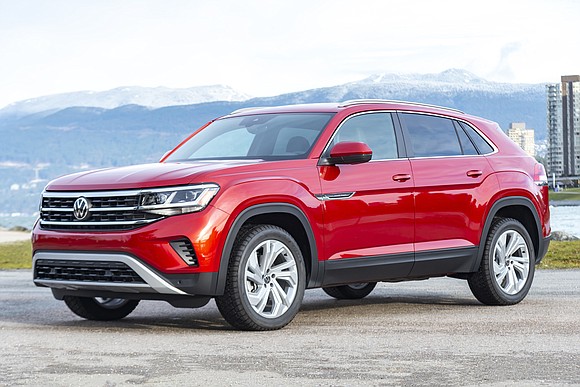 In a sense, Volkswagen customized its seven-seat full size Atlas crossover. They call it the Atlas Cross Sport.

It had a lower roofline and a steep angled rear hatch that was automatic power activated. It was shorter in length by 5.2 inches and lower by 2.2 inches but still a sizable crossover. The wheelbase was 195.5 inches.

However, our test model was a 2020 edition. But that was okay because the vehicle itself was better than okay.

There was R-Line badging on the unique front and rear bumpers that incorporated air intakes at the front and a diffusor in glossy black paint at the rear and side skirts.

Volkswagen offers a four cylinder and a six-cylinder engine with the Atlas Cross Sport. We had the larger powerplant. It was a 3.6-liter direct injected V6 that made 276 horsepower and 266 pound-feet of torque. It had aluminum cylinder heads, twin overhead camshafts, four valves per cylinder and variable valve timing.

We found the engine powerful, it had plenty of oomph and it was smooth. Gear shifts were practically imperceptible. Our test model had what Volkswagen has branded 4Motion, which is all-wheel drive. It will deliver power to all four wheels as needed.

We were impressed that our Cross Sport had a 19.5-gallon fuel tank. Even though mileage on our test vehicle was not great, 16 mpg in the city, 22 mpg on the highway and 19 mpg combined, with that size fuel tank it had decent range.

The interior of the Atlas Cross Sport was expansive. The layout was mixed, the instruments were analogue while the controls were digital. There was a touch infotainment screen. The front seats were heated though we would have liked a heated steering wheel.

We had a panoramic roof. There were five drive modes: econ, sport, snow, off road and custom. There were two USB jacks, an auxiliary jack and a 12V plug under the climate controls in the front, there was a USB jack inside the center console, and there were two more USB jacks in the back seat area and a 115V grounded plug. There was also a 12V plug in the cargo area.

The Atlas Cross Sport had a flat bottom steering wheel that took a little getting used to. The eight-speed automatic transmission could be shifted manually, and the audio system was thumping. We could not turn it up halfway without assaulting our eardrums.

VW said, the interior design of the Atlas Cross Sport is classic Volkswagen —clean and functional, with a premium feel. Driver controls were positioned for optimal ergonomics and usability, and simple, driver-centric displays enhance involvement behind the wheel.

The seat position, shifter height, and the spacing between the pedals are all designed with maximum driver comfort and safety in mind. With available two-tone inserts and stitching accents on the door panels as well as the steering wheel, the Atlas Cross Sport offers a high-end environment that belies its attainable starting price. Ambient lighting, standard on the Atlas Cross Sport SEL, further highlights this upscale character.

We can’t argue with any of this. The Volkswagen Atlas Cross Sport had size, maneuverability, and power. It of course was well equipped – the app suite Car-Net, a navigation system, satellite radio, voice controls and adaptive cruise control were among its creature comforts.