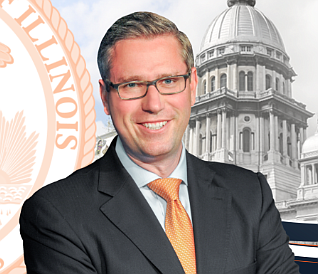 The milestone was confirmed in March and involves the earnings on what is currently a $17 Billion state portfolio. Frerichs has been state treasurer since 2015.

“The main job of the Illinois State Treasurer since 1818 has been investing state tax dollars,” Frerichs said. “Making smart and sound investments may not be glamorous, but it is what we do every day.”

Although the treasurer is the state’s chief investment and banking officer, lawmakers regulate what investments are possible and which are prohibited. For example, purchasing individual stocks in the state portfolio is not allowed. That is why convincing lawmakers to enact bipartisan reforms to allow for modern investment strategies was key to the $1 Billion in investment earnings since 2015.

These commonsense changes now allow the treasurer’s office to invest in secure public sector bonds, such as those issued by school districts to purchase land or erect buildings.

They include the new ability to invest in highly rated corporate bonds issued by such well-known titans as Caterpillar, Deere & Co., and Pfizer.

“Working with lawmakers from both parties we have the tools to execute smart and sound investment strategies that benefit taxpayers through greater investment returns,” Frerichs said.

Focusing on the job at hand also played a role in reaching the $1 Billion milestone.

Frerichs is the first state treasurer to serve consecutive terms since Judy Barr Topinka in 1999, which is the last time $1 Billion in investment earning’s was achieved by a state treasurer.

The $1 Billion in returns was achieved despite a dramatically lower interest rate environment. The typical federal funds rate in 1999 was 5.25 percent compared to today’s 0.09 percent. The federal funds rate is the rate banks charge each other for over-night loans and is the basis for other interest rates such as car loans, mortgages, and simple savings accounts. For example, the typical bank savings account rate in 1999 was 2.00 percent; today it is 0.03 percent.