Saga of Bosnian War is nominated for Best International Feature 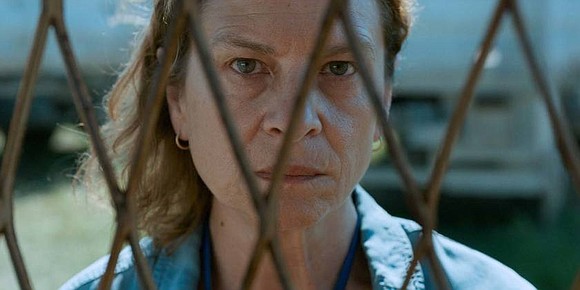 Director and Writer Jasmila Zbanic’s troubling film Quo Vadis, Aida? (Where are you going, Aida?, or, poetically, “”Whither goest thou?”) is the winner of the just completed Miami Film Festival’s Knight Marimbas Award and is also nominated in the International Feature category for the 2021 Oscars.

Taking place in the Bosnian War, primarily between the Serbs and the Croats in the 1990s, this dramatization of real-life events is a cautionary tale of a region largely at war with itself.

War in the Balkans is often used as a figure of speech when describing irreconcilable conflict. Quo Vadis, Aida gives it renewed meaning and urgency.

Aida Selmanagic (Jasna Duricic) is the UN interpreter inside a refugee camp in the small town of Srebrenica at the height of the war in July 1995. Hers is a thankless job, attempting vainly to translate vital communications between her half-hearted and self-interested UN protectors and the brutal occupying Serbian army. Each day, leaders of the terror force arrives with their heavily armed minions to terrorize, brutalize and conduct genocide against the camp’s largely Muslim inhabitants, which include her husband and two teen-aged sons.

Every word Aida utters must be carefully weighed, as lives hang in the balance. Even the slightest misunderstanding, or change in the terms of agreement, often made on the spot, can result in life or death for those inside the camp.

Her sense of futility is palpable. As she attempts to play the Catcher In The Rye, the life’s blood of those she is sworn to protect rains through her fingers like so many grains of sand.

Aida is also torn between her loyalty to those in the camp, and those of her long-suffering, but loving husband Nihad (a sympathetic and quietly heroic Izudin Bajrovic) and her terrified sons Hamdija and Sejo (Boris Ler and Dino Bajrovic).

Not only are the lives of the captive refugees on the line, but her family’s as well. Instead of offering shelter, the UN camp becomes a crucible of uncertainty and death.

Zbanic’s brutally honest film takes us directly into the vortex of this swirling hurricane of blood. We witness first hand the camp’s gut-wrenching horror through the unflinching eye of cinematographer Christine A. Maier. The haunting musical score by Antoni Komasa- Lazarkiewicz and taut film editing of Jaroslaw Kaminski, heighten the dramatic edge of this suspenseful film. The smell of death is palpable in the Production Design by Hannes Salat and Art Direction by Zelika Buric and Sabine Engelberg, makes this a difficult film to watch, yet, you can’t take your eyes off of it. Suspenseful writing in the screenplay by director Zbanic further adds to the feeling that the events are happening in real time and in the present tense. The overall effect is riveting.

There are vivid, realistic performances throughout. Were this any other type of film, Djuricic’s dramatic turn would deserve a Best Actress nod.

Johan Heldenbergh as the UN commander Colonel Karremans is soullessly dispassionate. His second-in-command Major Franken (Raymond Thiry), shares his stark realization that Europe has literally left them at the mercy of a homicidal maniac. Boris Isakovic is the sadistic Serbian General Ratko Miadic, who would just as soon hand you a chocolate bar as shoot you.

This superb film had its US Premiere at the 2021 Miami Film Festival, where it received rave reviews.

Quo Vadis, Aida? Is based on events that happened in Eastern Europe in the waning days of the last century. It is a painful reminder of the West’s collective foreign policy failures and our country’s own benign complicity in the slaughter of an entire population.

The fact that it is getting such resounding praise and attention from the Miami Film Festival and the Academy is perhaps due to the fact that Zbanic’s film is eerily prescient of the world we now live in. It is a transcendent tale of heroism and hope in the face of certain death.

The film also challenges our willingness to accept a world where the fate of Democracy and the fact of our mere existence are threatened by the forces of militarized evil. The Dayton Accords may have brought peace to Bosnia, but its rivers of blood still run deep. The film is available now on all On Demand and Video Streaming platforms. Please see it immediately.