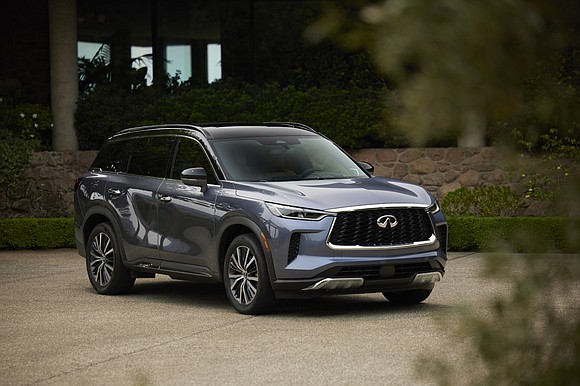 St Helena Ca - When it comes to the 2022 Infiniti QX60, it is not about horsepower, torque, or bulk. The three-row crossover is about understated refinement and elegance.

Yes, it had a 3.5-liter naturally aspirated V6 that made 295 horsepower and 270 pound-feet of torque. It was mated to a nine-speed automatic transmission. The combination got 20 mpg in the city, 25mpg on the highway and 22 mpg combined.

Front wheel drive is the natural setup for the QX60, but we had an all-wheel drive model with paddle shifters, and it could tow up to 6,000 lbs. There was also a panoramic roof.

To be clear, the 2022 Infiniti QX60 is new but it has also changed. It is not a brutish overbearing or hulking sport utility. And it won’t be marketed that way.

It had a gently rearward sloping roof. Using slivers of LED daytime running lights along the top of the headlights, they’ve pierced the top pf the grille and opened the face of the QX60.

The sides were taut with concave doors. And the rear had a dual exhaust. The openings looked like shiny plastic, but they said it was chrome.

Infiniti has also changed the target buyer of the QX60. They’re looking for what we call girl bosses. Women who may not have it all but they’re certainly looking for it and are close to attainment. This multitasking group has kids, husbands, careers, and businesses they run. Infiniti wants their husbands too.

These buyers spend their dollars on quality and workmanship. And they’re not pretentious. These women carry a shoulder bag with their three-quarter length coat, and they wear gym shoes to do their running around. But the bags, the shoes and the accessories are top notch.

Our test vehicle had a quilted leather interior with piping. And it had open pore ash wood trim. There was a lot of it. A black piano template covered the front edge of the center console, which was angled.

Infiniti switched the QX60 to shift by wire. Yeah, the technology is slick, but it is also practical. The move created more cargo space beneath the console. The second-row seats flip and slide forward with the pull of a lever. They can be easily configured for exit from the third row. Of course, there was a power liftgate with hands free operation.

We thought it significant that the dash was low. In other words, the interior did not have the feel of a cockpit. It reminded us of den or cozy sitting room.

The QX60 had five drive modes, an upgraded suspension and smart all-wheel-drive available on all trim levels. The system was capable of direct coupling that seamlessly transfers up to 50 percent of its available power almost instantly to the rear wheels for better traction. We certainly did not need that feature here, where it was clear and dry.

They also made the QX60 crossover easier to drive. Steering was six percent faster. On these undulating roads like CA1 and 116 West, there was very little body roll. In places this was a tight rout with the roads being squeezed on both sides by towering Redwoods. It was a challenging but easy drive to Goat Rock Beach.

The route was full of twists and turns and the pavement was certainly not pristine. Still the QX60 ran silent and was 12 percent quieter under acceleration. We don’t know about the numbers which Infiniti presenters gave us but when we closed the windows it was like entering a silent world. The second-row side glass window had been thickened. Still, it may have been too quiet. We could hear the whir of the driver’s seat massager.

And while we’re at it, the rearview mirror camera had a reflection. We had trouble switching back to the regular mirror. But that was more on us once someone told us how to do it.

There was forward collision warning, rear cross traffic alert, lane departure warning, the 2022 QX60 could “see” two cars in front. The 12.3-inch infotainment screen floated atop the dash which was two levels. The lower one was quilted. This three-row crossover also had a 10.8-inch head up display and 12-inch digital instrument display.

But they managed to drop in all this technology without making the interior feel cold and impersonal.

Connectivity is as important as any characteristic of a vehicle today. And the QX60 could accommodate seven devices. It also had Google in the navigation system. Interactive Display with wireless Apple CarPlay® and USB-based Android Auto™ compatibility software ere part of the connectivity mix.

Let down the second and third row and there was 75 cu. ft. of cargo space. Of course, there were voice controls, satellite radio, navigation, lane departure warning, heated and cooled seats, auto pilot to help keep the QX60 in the middle of the lane and other creature comforts.

There are four trim levels, each comes in front-wheel-drive or all-wheel-drive. That means there are eight models ranging in price from $46,850 to $63,250. Pricing does not include taxes or destination charges.