Penitentiary’s roll in racial bias, equity to be detailed 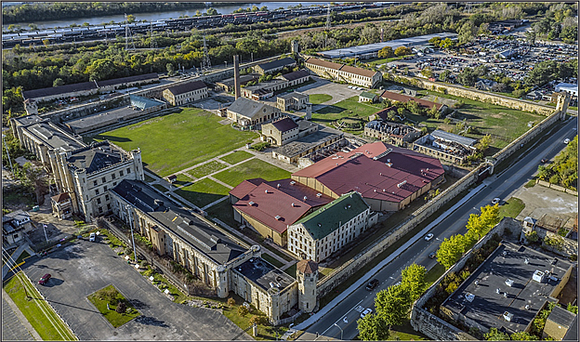 Jayne M. Bernhard, Joliet City planner, and staff liaison for the Historic Preservation Commission said the 180-acre Illinois State Penitentiary – Joliet is a unique and iconic historic resource for its Castellated Gothic Revival style architecture and use of Joliet Limestone; for its history as a penal institution; for its infamous former inmates; and its place in popular culture resulting from movies, television, literature, and song.

The Old Joliet Prison along Collins Street has an almost ominous presence and the history behind it is likely even more sinister.

More is likely to be revealed now that the City of Joliet has received notice of an award of a $35,000 grant from the National Park Service to prepare a National Register Historic District nomination for the Illinois State Penitentiary – Joliet (later renamed Joliet Correctional Center, commonly known as the “Old Joliet Prison”).

Jayne M. Bernhard, Joliet City planner, and staff liaison for the Historic Preservation Commission, wrote the grant. She said the 180-acre Illinois State Penitentiary – Joliet is a unique and iconic historic resource for its Castellated Gothic Revival style architecture and use of Joliet Limestone; for its history as a penal institution; for its infamous former inmates; and its place in popular culture resulting from movies, television, literature and song.

“The architecture and design of the main Penitentiary and Women’s Prison as well as the philosophies and practices of incarceration and prison reform carried out within its walls and grounds make it a significant local, state, and national historic resource that should be preserved,” Bernhard said.

“The Penitentiary is also significant as a place of conscience in our nation’s racial and ethnic history as minority populations have historically been overrepresented in the penal system. The forthcoming nomination will expressly detail the Penitentiary’s role in racial bias, equity, and criminal justice reform – past and present. The information generated from the research and writing of this nomination will advance dialogue of these critical societal topics. The Penitentiary site can offer a platform for teaching and discussion of these topics as well.”

The Joliet Area Historical Museum has hosted various tours and events at the prison, including the recent Bash at the Big House concert.

According to Bernhard, while the grant might not seem like much it can be used to pursue other grants and help the city in moving closer to getting the prison on the National Register of Historic Places. That would enable the city to obtain certain tax credits and other grant opportunities. The goal, Bernhard said, is to dig deeper into the history of the prison, and in the end get a “nice working document that will tell the real story behind the prison.”

It will go beyond talking about the architecture of the prison and dig deeper into the philosophies and practices of incarceration, giving attention to racial bias,” she added.

Joliet Mayor Bob O’Dekirk, said “the City of Joliet is committed to preserving this important piece of history. We are excited to see our efforts supported once again by our federal partners through the NPS grant,” he added.

Will County Board Rachel Ventura (District 9), of Joliet, is a Heritage Corridor board member who also is running for Illinois State Senator in the 43rd District. She said while the

prison still resides in Joliet, and sits in a black and brown community, the dollars generated from tourism could positively impact the people living in those areas. These include Forest Park, Fairmont and the Collins Street neighborhoods.

“There’s also a direct correlation of where those dollars could help improve the lives of people impacted by incarceration,” Ventura said. “Joliet should purposely invest the tourism dollars generated by the events help at the prison into the neighborhoods that surround it.”

Bernhard said researching the history behind the prison and all the details about its architecture is beyond the scope of what she and the planning department in Joliet can do. The grant will go a long way in helping secure more grant money to hire consultants to do that work, she said.

“This will leverage other initiatives and projects to increase both awareness about the prison’s history and thus create more educational opportunities so people can learn more about the prison, beyond its architecture and that alone is significant,” she said.

“It is important as an architectural icon – you just don’t see facilities like that anymore.”