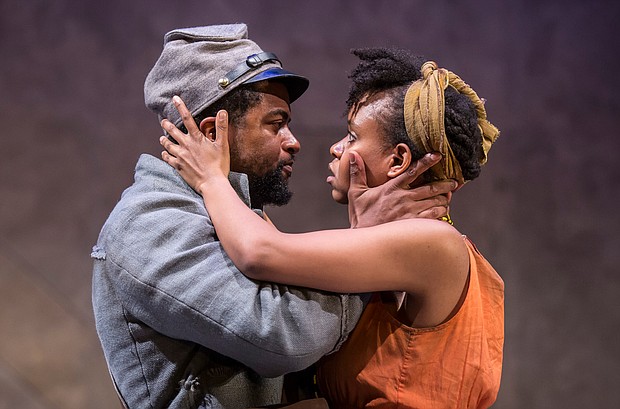 Pulitzer Prize winner Suzan-Lori Park's Father Comes Home From the Wars (Parts 1, 2, and 3) clocks in at a whopping 3 hours and 15 minutes (including two 10-15 minute intermissions), but audiences will find themselves preening their ears to hear every word, with unwavering attention. The play tells the story of Hero, a Texas slave during the time of the Civil War (played with resounding conviction by Chicago theatrical favorite Kamal Angelo Bolden (Court Theatre, Northlight Theatre, Victory Gardens, Chicago Shakespeare Theatre), who is faced with a dilemma; join his master as his servant during the Confederate army with the (alleged) promise of freedom, or stay behind as a slave on the plantation. Not much is said in the history books about the role of slaves who served on the side of the Confederacy, but it is a fact that many were brought into the war by slave holders, some as man servants to their masters and others who fought willingly and vigorously, many with promise of freedom once the war was over.