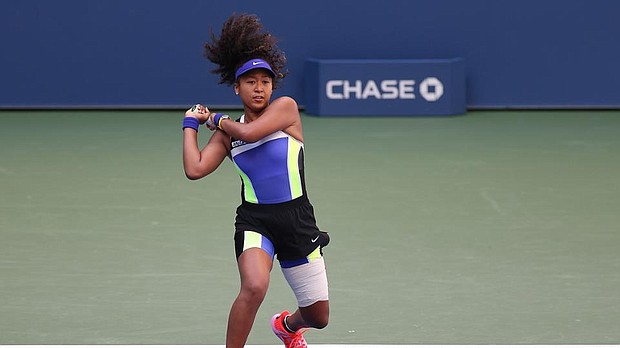 It’s the Second Round of the US Open. Former tennis great James Blake is in the ESPN announce chair in the practice court shed. Canadian Felix Auger-Aliassime is battling Britain’s Andy Murray on Arthur Ashe. Meanwhile, over on Louis Armstrong, Sloane Stephens is on her way to Round 3 against the Queen of tennis, Serena William after trouncing Olga Govortsova of Belarus. On the Outer Courts, unseeded American Frances Tiafoe is advancing into Round 3 after pounding Australian John Millman on 11, while Madison Keys is cruising past Spaniard Allona Bolsova.

Naomi Osaka is at the top of her game. Two years ago, she won the US Open in a contentious emotional match against tennis titan Serene Williams. Since that dramatic win, she has become the highest paid female athlete in the world. She has the distinction of being the only person of Asian extraction to win a Major. Born in Japan of a Haitian father and a Japanese mother, she competes under the Japanese flag. By her own designation, she declares herself a Black Woman. It follows that she made the dramatic decision to sit out the semifinal match of the Western and Southern Open last week in New York, in protest of the police lynching in Kenosha.